What a night and what an amazing reveal event Sony hosted for the upcoming PlayStation 5 console! Filled with info we all have been waiting for and also some amazing games we will get to play in the future; including the upcoming Marvel’s Spider-Man: Miles Morales PS5 game developed by Insomniac Games.

Yes, friends, this is the topic we will cover below, because as you will see even though the Marvel’s Spider-Man: Miles Morales announcement trailer is only 1 minute long, there are some details we can pull from it.

Fear not though because throughout the upcoming weeks we will analyze every game trailer revealed by Sony last night, so make sure to subscribe to my channel on YouTube if you are interested in what future holds for us, gamers.

Before we talk about the Marvel’s Spider-Man: Miles Morales trailer and everything we can learn from it, I would like to thank all of you guys for the continuous support on all of my videos, including the one above.

Last but not least a small spoiler warning for those who didn’t play the 2018 Marvel’s Spider-Man on PlayStation 4. This analysis contains sequences and info from the previous installment, so you may want to check it out after you finish the said game.

Good then, so let’s start with our Marvel’s Spider-Man: Miles Morales trailer breakdown which was also the first video game revealed by Sony last night. A great start if you ask me because the best way to reveal the upcoming PlayStation 5 is by using an exclusive title.

Yes, I said exclusive because Marvel’s Spider-Man: Miles Morales just like the previous game in the series will be available only on PlayStation; however, a lot of people wanted to know if they will be able to play it on PlayStation 4 as well.

Check This Too!  Desperados 3 Release Date Announced By A New Trailer

The long answer short is that most likely no. It will be available only on PlayStation 5 and this is somehow confirmed by Sony’s blog post from which we can learn that Marvel’s Spider-Man: Miles Morales is a video game that aims to harness the full power of the next-gen PlayStation console. 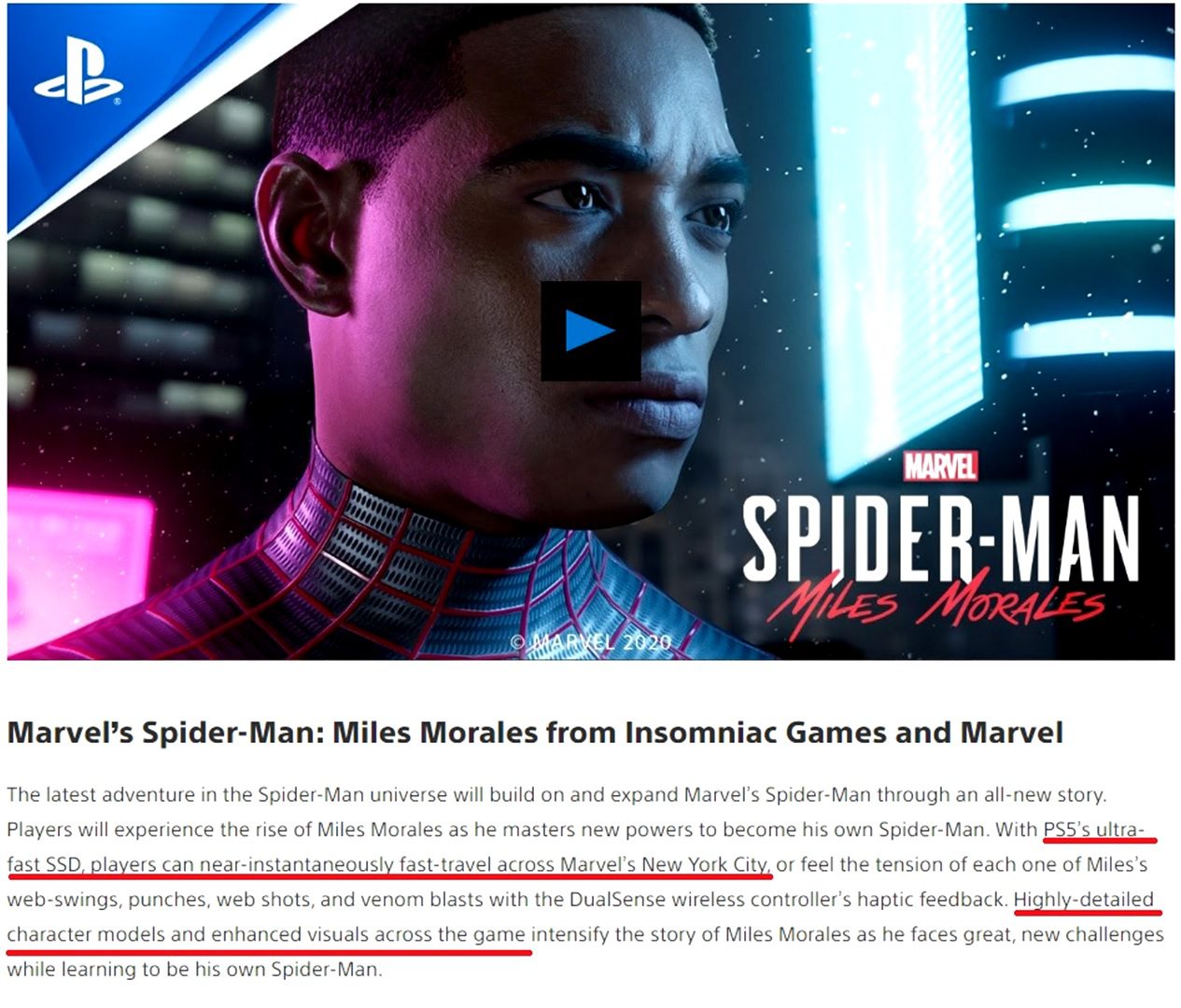 From the said blog post we can learn that thanks to the PlayStation 5’s ultra-fast SSD; the fast travel option in Marvel’s Spider-Man: Miles Morales will be instant; and we will also enjoy highly-detailed character models and enhanced visuals. Some features that unfortunately the PlayStation 4 can’t handle right now.

Furthermore, from Marvel’s Spider-Man: Miles Morales release date which is Holiday 2020; we can learn that it is a launch title for PlayStation 5.

Moving to the actual trailer, let’s see what info we can pull from it.

Who Is Miles Morales

The title alone reveals that the upcoming Marvel’s Spider-Man video game revolves around Miles Morales, a character we all remember from the previous game.

He is Peter’s friend and the son of police officer Jefferson Davis who is eventually killed by Mister Negative. Miles joins the non-profit organization F.E.A.S.T, where he meets Aunt May thanks to Peter.

Later in the game, Miles finds out that Peter is Spider-Man and he is eventually bitten by a genetically-enhanced spider allowing him to gain spider-like powers. By the end of the game, we learn that Miles becomes the new Spider-Man and Peter his mentor; which is also confirmed by The City That Never Sleeps DLC where Peter starts training Miles.

In the first five seconds of the trailer, we can actually hear Peter’s voice while Miles struggles to contain his new powers.

Speaking of powers, we can notice Miles Morales’ Venom Strike power which is somehow unique along with the ability to camouflage himself.

These two unique abilities, the Spider-Camouflage and the Venom Strike; also appear in the Spider-Man: Into the Spider-Verse computer-animated film in which Miles Morales is playing Spider-Man. Make sure you watch it before the release of the video game.

So, from the first seconds, we can learn about Miles’ first ability which is the Venom Strike. 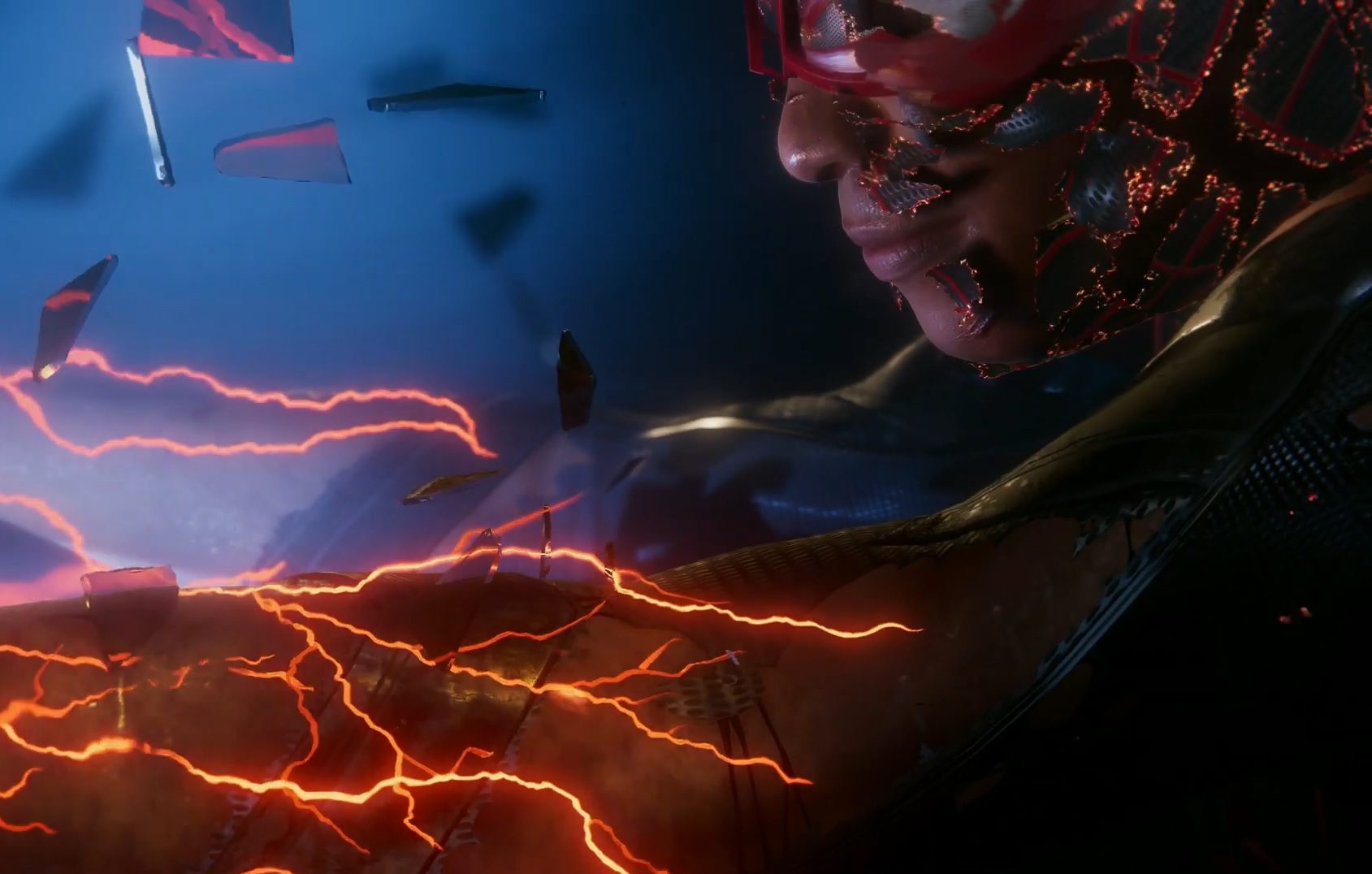 As we move forward, we can see Spider-Man swinging across New York; which looks similar to the city we have explored 2 years ago on PlayStation 4; but we can also notice that it’s snowing and the sun is about to set.

Next, we see Miles swinging towards an opponent. Notice the interesting purple equipment. We will discuss it in a moment. 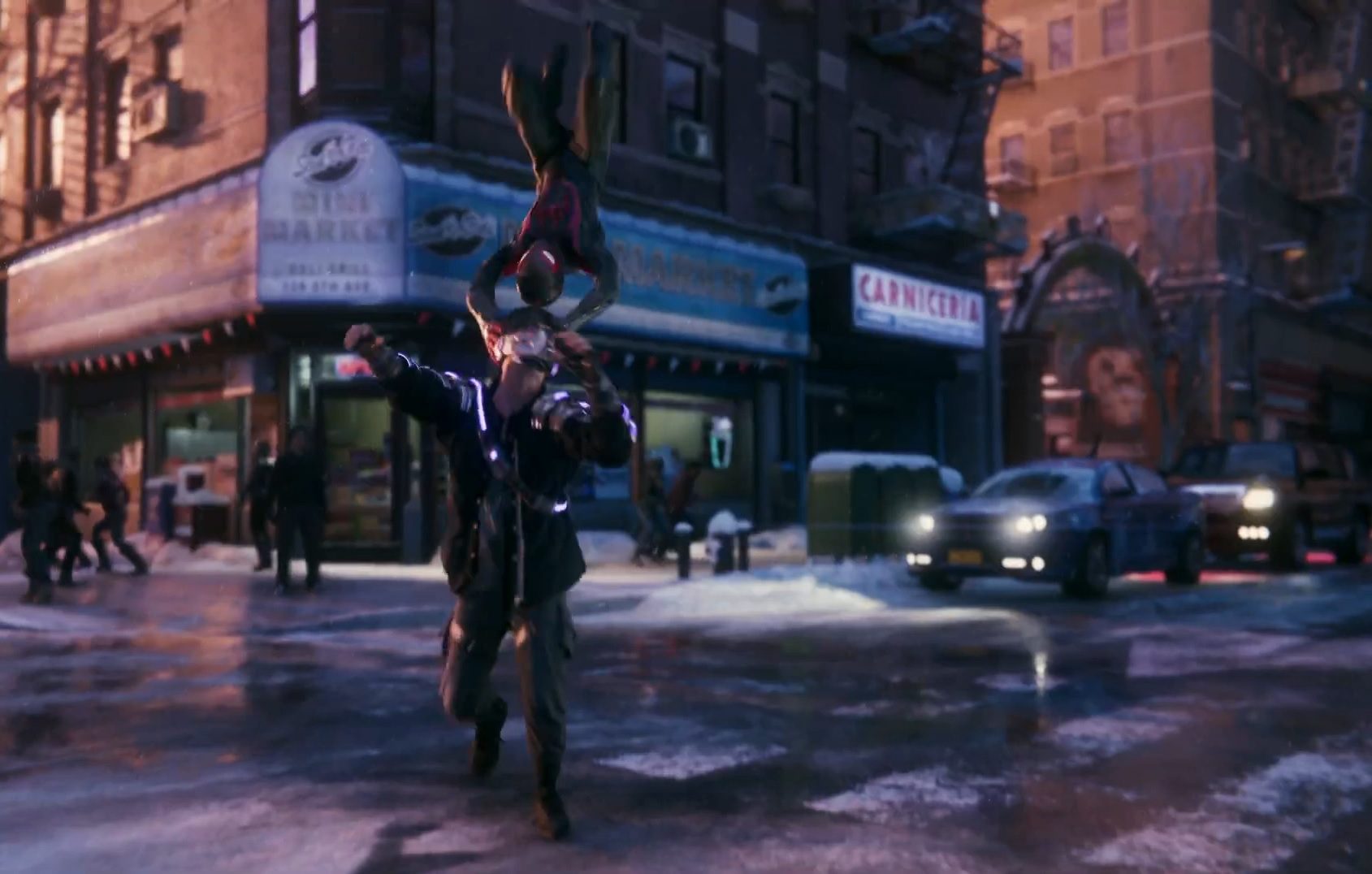 Several seconds later Miles walks the streets at night and then Spidey performs a diving move. What we can learn from these sequences is that both weather and daylight cycles exist in the upcoming game.

Moving forward we can see Spider-Man saving a civilian in a quick-time event similar to those from the previous game. You may remember the activities we had to complete in each district. It looks like they are back along with the quick-time events.

When we return to the street, we can see the city decorated for Christmas; which means that the story will take place during the Holiday season. Awesome setting especially because the game and the PlayStation 5 will both release this Holiday!

In the next sequence; we can spot Spider-Man who fights another goon wearing the purple equipment. Additionally, he has an interesting weapon that looks a lot like an electrical baton. You may remember it from the previous game.

While the weapon itself may not be that important, the color is, because this purple confirms one of the villains which I believe to be Prowler and Miles is fighting some of his goons.

I won’t go into details about Prowler and who he is; but if you want to find out, watching the Spider-Man: Into the Spider-Verse will help you understand. 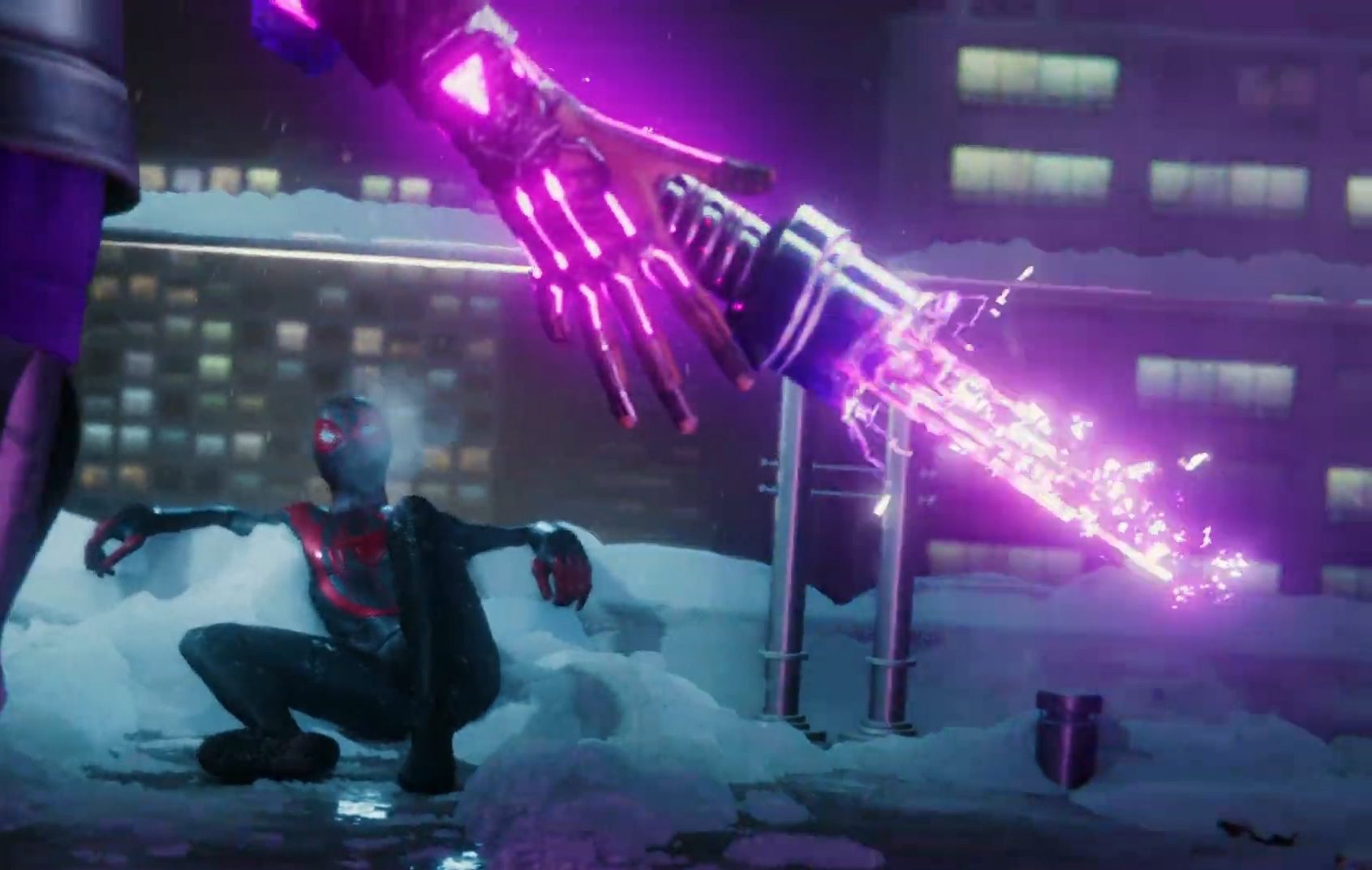 As Miles takes care of the goon, we can see the second ability in action and that is the Spider-Camouflage; followed by another event or activity we all remember: Car Chases.

Finally, we can see our beloved Spider-Man using the Venom Strike again to take down one last enemy. Here we need to notice here is that this specific enemy is way more powerful. Also, he is wearing an interesting armor and a helmet.

And this specific goon looks a lot like a Sable agent to me. 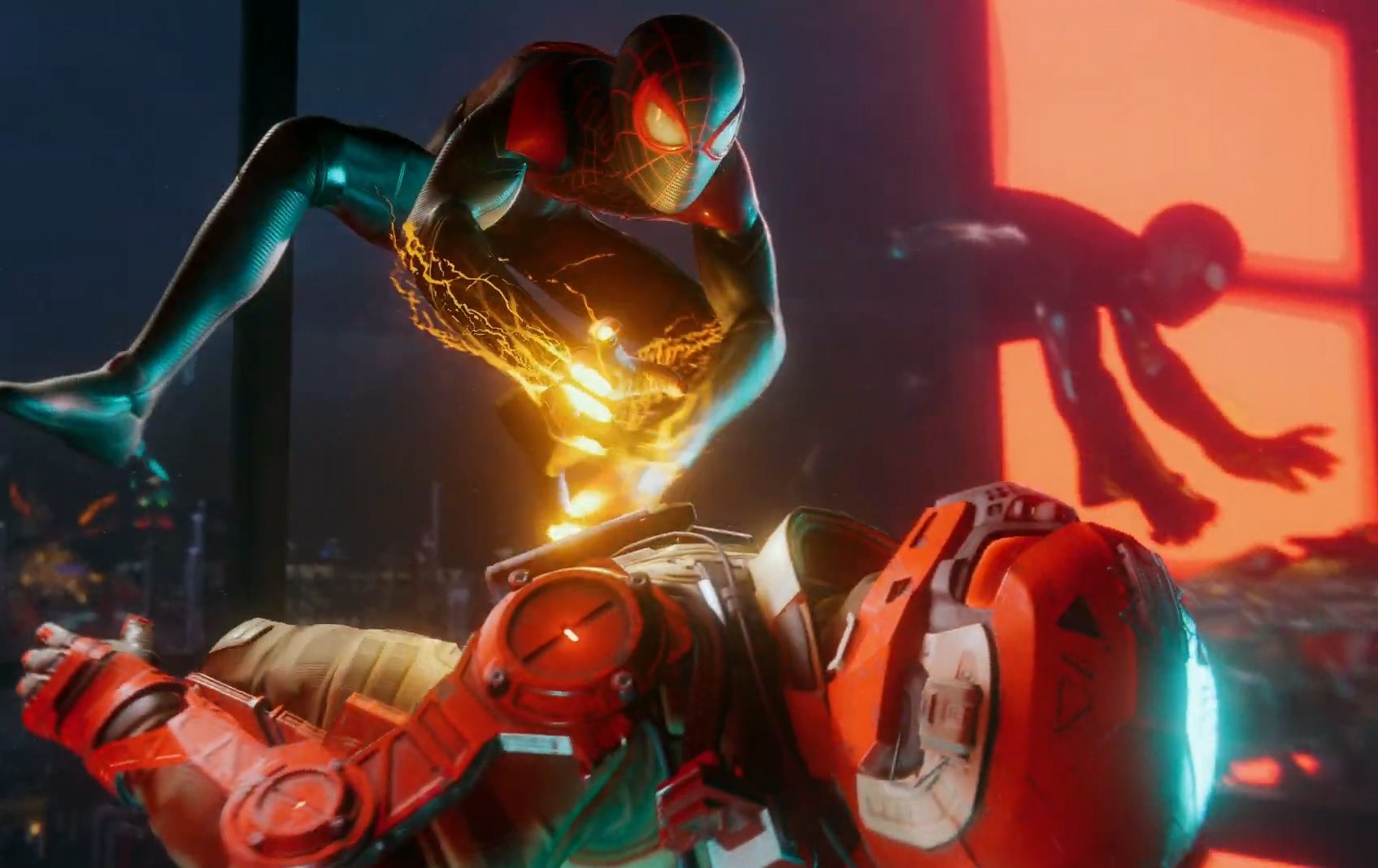 As the trailer ends, we can spot our future Spider-Man who is not only awesome; but also older than in the previous game; which means that several years passed since Peter Parker retired.

So, these my friends are the details I managed to spot in the first Marvel’s Spider-Man: Miles Morales trailer; but obviously more will be announced as the year moves forward. Hopefully, we will also be able to learn more about the exact release date, outfits, skills, villains, and more.

Make sure to subscribe to my channel on YouTube if you wish to learn more about Marvel’s Spider-Man: Miles Morales video game and about the upcoming PlayStation 5 titles in general, or visit my PlayStation 5 Corner on YouTube for all trailer breakdowns (including Ratchet & Clank: Rift Apart).

Vlad
Founder and senior content producer at GameClubz, I am the former CEO of VGFAQ.com & Primewikis.com. I've been playing video games since 1994, and I like to keep up with the latest video game releases. Feel free to get in touch with me if gaming is your passion. You can always find me on YouTube or using my social media profiles below.
DON'T MISS THESE
Release DateNewsPlatformsTrailers
MORE
Read More
81 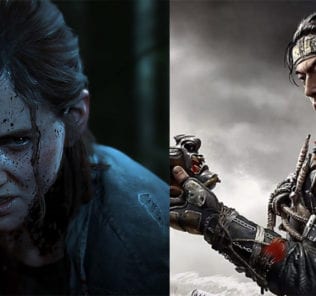 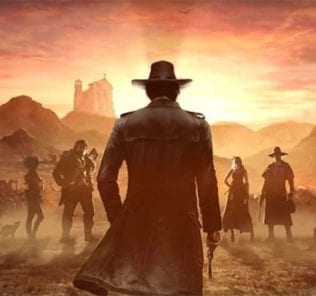