If you want to cheat in Valheim, then knowing the best cheat codes is a must, and even though most players don’t enjoy cheating; since I have mentioned one of these in the guide on how to save your game, below we’ll go the extra mile and talk about all Valheim Cheats or Valheim Cheat codes you can use.

These codes will give you huge advantages while exploring the world in the video game developed by Iron Gate; and they allow you to do, well basically everything you want.

From teleporting to revealing the whole map, and everything else in between. Even becoming a God.

Not an actual Norse God obviously, but a Viking so strong that nobody will be able to kill.

As usual, before we start this guide on how to cheat in Valheim, there are several things you may want to be aware of.

How To Cheat In Valheim And Play It Safe

The first thing you’ll need to know is that the Valheim cheats listed below are actually console commands, and this means that developers know about their existence; however, even so, you don’t want to ruin the experience of other players.

As such, I don’t encourage using these cheat codes in Valheim while playing with other people, and there are two reasons for this. First, you’ll be strong enough to defeat every enemy even with your bare hands; meaning that you don’t need other players to do that.

And second, because using cheats can and will affect the experience of other players which is always a bad thing. As such, reports will soon start to pile up and this could lead to a ban.

Therefore, if you want to cheat in the video game, play it safe by creating another character and use it to play solo. You against the world. Trust me it’s fun.

That’s all you have to do and you may want to remember this the moment you start the game and you want to cheat.

How To Use Cheats In Valheim

Assuming you want to learn how to use cheats in Valheim, well, this is actually quite easy to do, because you don’t need a Valheim trainer, nor additional software. You just have to type in some cheat codes and that’s about it.

Let’s start with the first one. Keep in mind that all Valheim console commands below are case sensitive meaning that you’ll type them in exactly as they appear in this guide.

The very first thing you’ll want to do is to bring up the console. This is done with the push of a button. Or key. And that key is F5.

Press F5 and you’ll see the console on your screen. To exit the console you’ll need to press Esc.

Good, so now that the console is up, it’s time to activate the Valheim Cheat Mode.

Simply type imacheater and then press Enter. On your screen, you should see the following message: Cheats: True. Just as you see it below.

Pretty easy right? Good, so now let’s go over some of the best Valehim cheats. I tested most of them, and honestly, some are useless.

I’ll still list them at the bottom of the guide in case you want to try them as well.

As said, after you activate the Cheat Mode in Valheim, you may want to try various commands, but I suggest using the following order.

To become a God, you just have to ask. So, type god and you’ll see another message: God Mode: True.

Basically, by using this cheat, your Viking won’t take any damage. Even if you fight a boss such as Eikthyr without any weapon and in your underwear he won’t be able to kill you.

It will take time because your damage will be insignificant but you can still beat him.

Keep in mind though that the Valheim God Mode cheat resets if you log out (as in you’ll have to activate it again). Finally, you can see it off by typing god again.

The next cheat you may want to try is the one that basically increases certain skills. Here things are a bit different but I’ll tell you how it works.

The command is raiseskill followed by [skill] and [amount], where skill, is the name of the skill you want to max out, and [amount] is a number you’ll need to type. This number signifies the amount of skill points you want to add to a current skill.

So let’s say you want to increase your unarmed skill by 20. In this case, you’ll type raiseskill unarmed 20. Just as I did below. 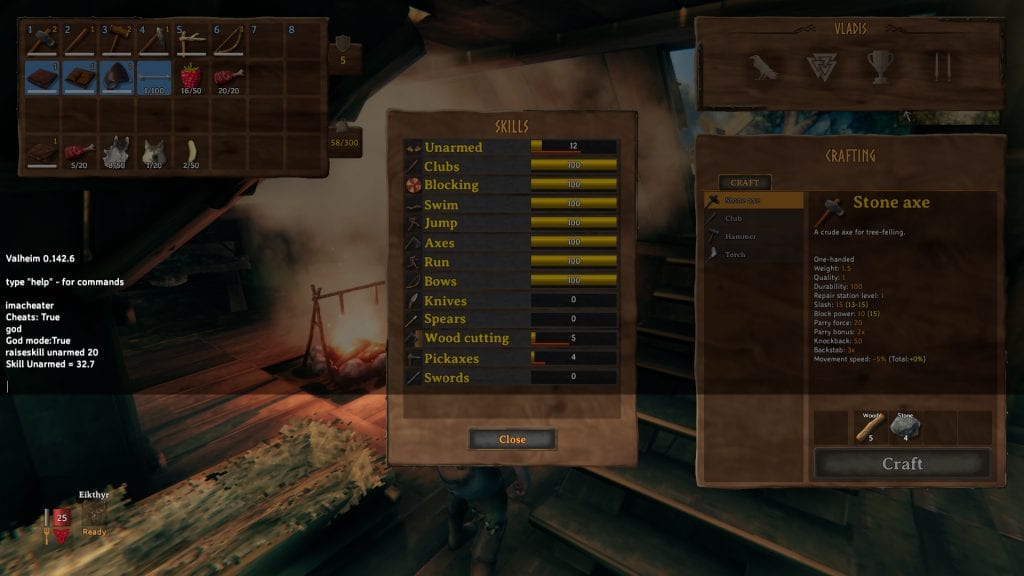 This command will help you get an additional 20 points to your current unarmed skill. Just so you know the cap for a skill in Valheim is 100, so when you reach that amount you won’t be able to increase it further.

Why is this command so awesome? Because by using it you can max out your stamina, your damage with all weapons, your jumping, swimming, blocking, you name it. Assuming you want to max out your stamina in Valheim the moment you start the game, type raiseskill stamina 100 and you’re done.

Now, before we move to the next cheat, three things worth mentioning here:

The next command that I am sure you’ll love allows you to fully reveal the map.

It is extremely easy to use and it’ll basically show you the world map. Just type exploremap and the whole world will be revealed. The fog of war is also removed this way.

Just like the previous cheat, you don’t have to activate it every time you return to the game; but you can use resetmap and all areas you explored will disappear.

Here is how your map should look like after using the Valheim map cheat.

The next cheat is also very useful, because you may remember that we discussed how to save your game and we all know that the option is missing and you’ll need to logout if you want to do this, let’s say legally.

Well if you type save, you’ll no longer have to worry about that save button because this cheat forces the game to save your progress.

Check This Too!  Valheim Ancient Bark: How To Get, Spawn Id, Location & Farming Guide

These are the cheats that I consider most useful; however, there are a lot more, and I listed them below. Try them and see how they work.

Keep in mind that you need to type these exactly as you see them, but you are free to change the variables if they exist.

And that’s it! These are all Valheim cheats and cheat codes, available in Early Access, and most likely in the final game as well.