Little Nightmares 2 Glitching Remains, just like the Hats we discussed previously, also count as collectibles, but they are a bit harder to find if you don’t know where to look for them.

Each chapter in the video game developed by Tarsier Studios features a specific number of Hats and Glitching Remains, so if you want to know where to look for all Little Nightmares 2 Chapter 1 Glitching Remains, this guide will help you.

To make your job easier, I will cover these in the same order as they appear in the game.

So let’s see where are these Little Nightmares 2 collectibles.

As said these collectibles are a bit trickier to find, and a good example is the very first Glitching Remain.

This can be found the moment you reach the broken bridge.

To cross the gap you’ll need to jump down, then start climbing the wooden platform on the other side.

Before doing this though, you’ll want to walk towards the screen, then slightly to the right (as pictured below). 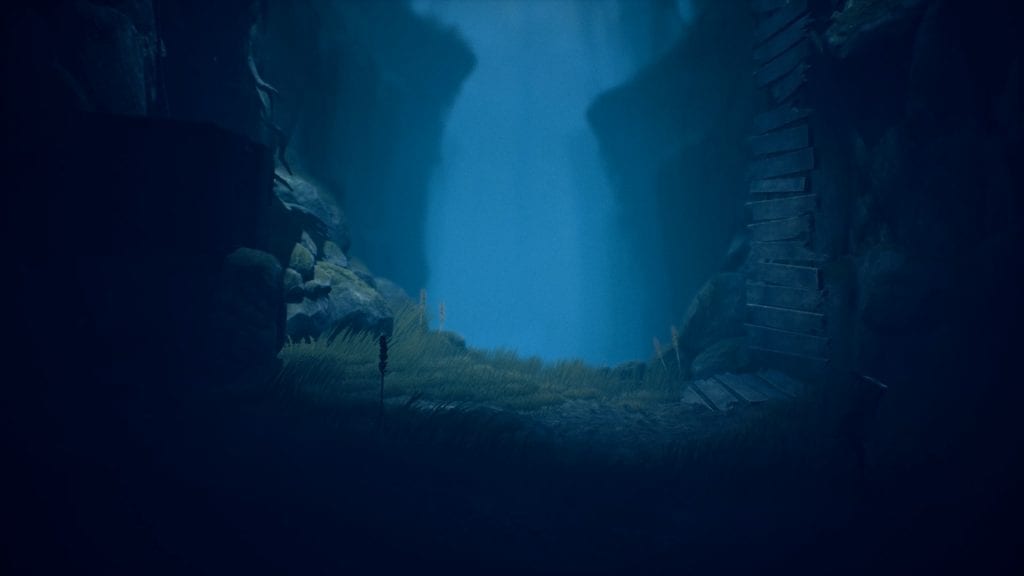 Keep moving right and you’ll find a tunnel. At the end of the tunnel, there is a small cave and the collectible; which looks like a body. Remember to walk through the shadowed body to get it.

The second Little Nightmares II Glitching Remain is also inside a tunnel.

After you get the previous one, keep advancing and you’ll find a stick you can use to disarm a bear trap in front of a log.

Once you do that, go through the log, and when you exit on the other side turn left as you can see in my screenshot. 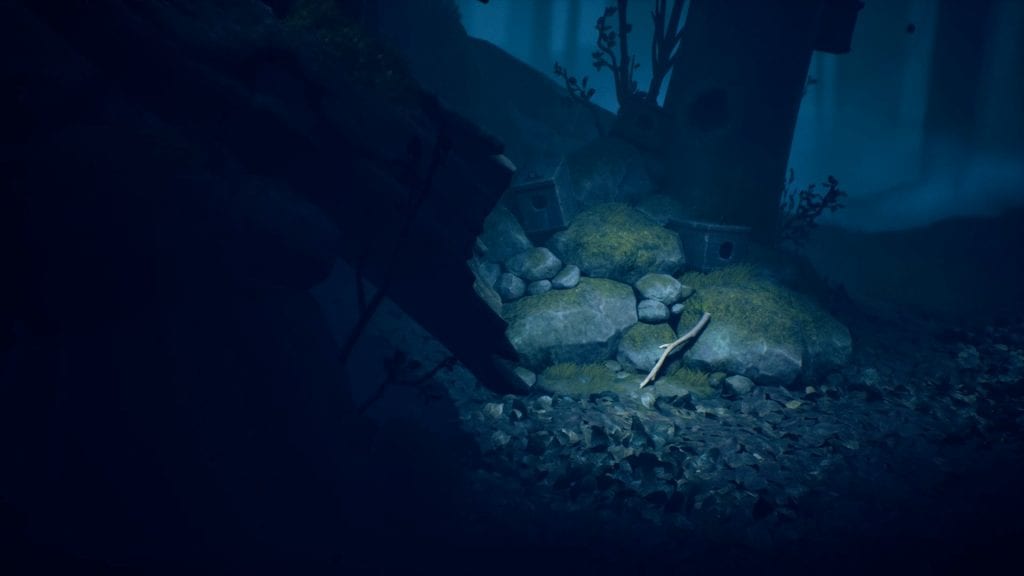 Enter the tunnel and the Glitching Remain will wait for you next to the carcass of a wild animal.

After you escape the cabin, you will be able to get the third Glitching Remain in Chapter 1.

Just like the previous ones, this one is very well hidden.

You’ll find it in the outhouse pictured below. Approach it, then your little friend will help you reach the locker and open the outhouse. 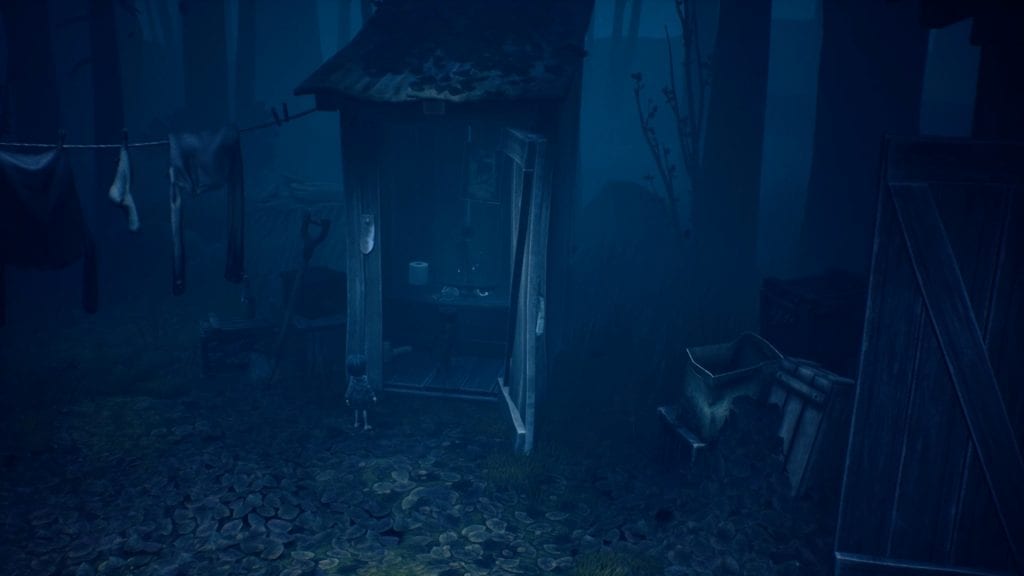 Inside the outhouse is the third collectible

The final Glitching Remain collectible in Chapter 1 of Little Nightmares II, can be found in the final section.

To get it, first, you’ll have to deal with the Hunter, then sail away with your friend.

When you reach the shore, just before entering the next building, look around and in the distance, you’ll see a TV.

Walk away from the screen and next to the said TV is the Glitching Remain, as pictured below. 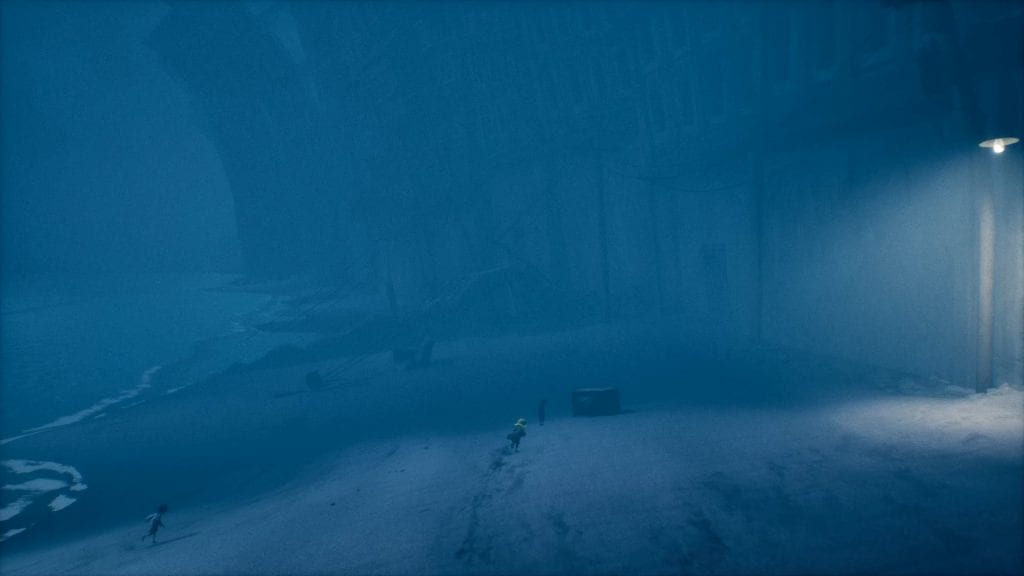 Look for it on the beach

And that’s it friends. These are the locations of the Little Nightmares II Chapter 1 Glitching Remains.

Little Nightmares 2: Where To Find All Hats

Founder and senior content producer at GameClubz, I am the former CEO of VGFAQ.com & Primewikis.com. I've been playing video games since 1994, and I like to keep up with the latest video game releases. Feel free to get in touch with me if gaming is your passion.

Little Nightmares 2: Where To Find All Hats

Little Nightmares 2 Hats, along with the Glitching Remains count as collectibles, and if you’re wondering where to find all Hats in Little Nightmares II, you’re in the right spot because I am going to tell you just that.

So, the guide below includes all Little Nightmares 2 Hats locations, that will help you unlock the Far Ahead trophy/achievement.

Before we start though, it’s worth mentioning that out of 12 Hats in Little Nightmares 2, one is unlocked automatically when you start the game, and two are part of the DLC. I’ll cover those as well, just in case you need them.

Great, so let’s start with some basics.

How To Change Hats In Little Nightmares 2

You can change Mono’s Hats from the menu.

Once you pause the game, go to the Hats section and pick the Hat you want to see on Mono’s head.

You can see all of them below. 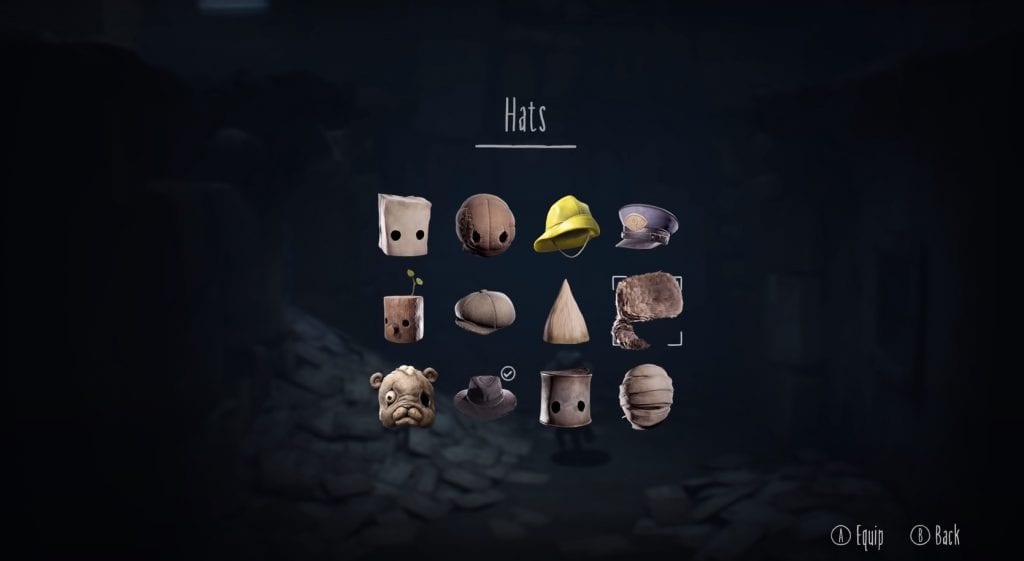 Additionally, you can track how many Hats are in each chapter by returning to the Main Menu, and then by accessing the Chapter Select. On the right side, you’ll be able to see the number of Hats you have found as well as the number of Glitching Remains.

As said some Hats are free, but some must be found.

The first free hat, or the hat you’ll unlock automatically, is the Paper Bag Hat, or the one Mono wears at the beginning of the game.

You don’t have to do anything to get this one.

The second Little Nightmares II free hat is the Mokujin Hat obtained by pre-ordering the game. Again, this one unlocks automatically.

The third free hat is the Cowboy Hat that becomes available after you beat the game, or after you complete the fifth chapter.

Besides these three; however, there is a fourth hat included in The Nomes Attic DLC, but this one comes with a puzzle, and we will discuss it below.

This brings us to a total of 8 hats that must be actually located in the game. So, let’s start with Chapter 1.

Where To Find All Little Nightmares 2 Hats In Chapter 1

Chapter 1, or The Wilderness includes 2 Hats (for the base game) and three if you have The Nomes Attic DLC.

The first one is the Fur Hat or the Racoon Hat if you want. You may want to find these while also getting the Chapter 1 Glitching Remains.

To get this one, you’ll first have to get inside the first house, and then when you exit the kitchen, go down the hallway (as in towards you), then turn left.

The hat as you can see below is on a carpet on the ground. 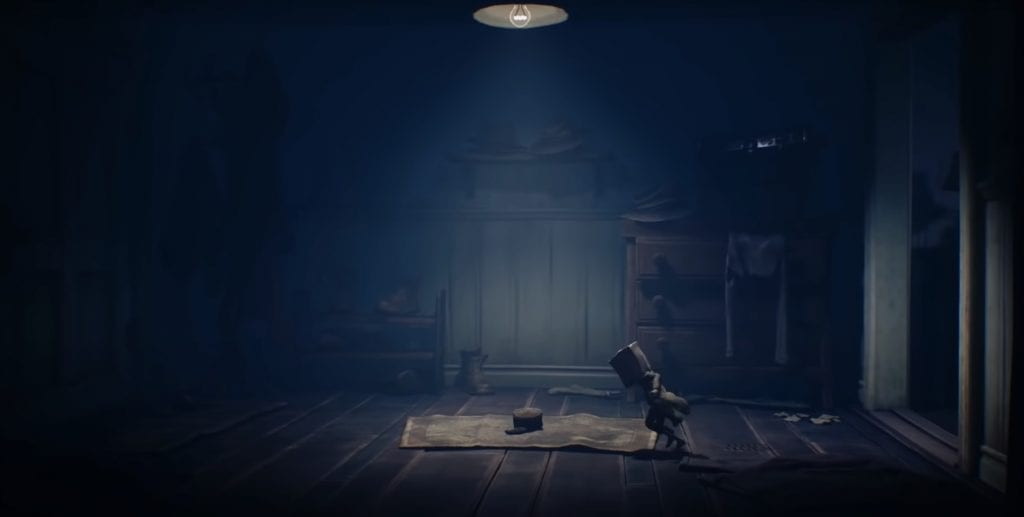 The Fur Hat is on the ground

The next Hat is the Nome Hat; however, this one is not available in the base game, as it is a DLC bonus.

After you get the key in the attic, if you have the DLC, you’ll see a Nome that spawns.

To get the hat you’ll need to follow the said Nome who will end up in a suitcase. Approach the suitcase, and then the Nome will jump inside a box.

Hit the box with the shoe, and then the funny fellow will jump into a drawer. Open the drawer and then he’ll go under the armchair. To make him get out jump several times on the armchair.

Next, he’ll go through a hole in the wall, and here you’ll have to solve a puzzle.

Without ruining it for you, once you finish the puzzle, you’ll get the Nome Hat below. 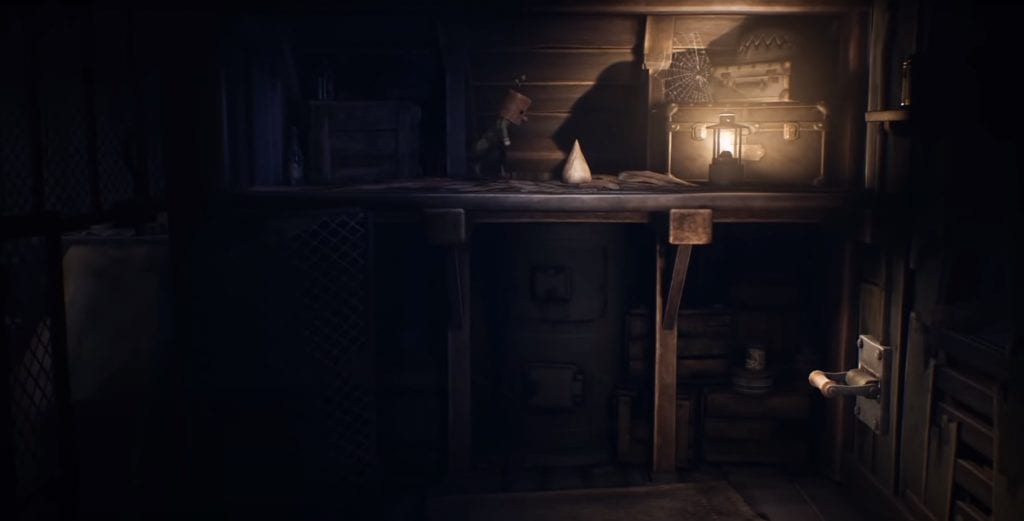 The Nome Hat is in the attic

The third and final Hat in Little Nightmares 2 Chapter 1 is the Rain Hat.

It is found after your first encounter with the Hunter. Eventually, you’ll reach a bridge and after you cross it, the Hat will be in a cage above you as you can see in my screenshot. 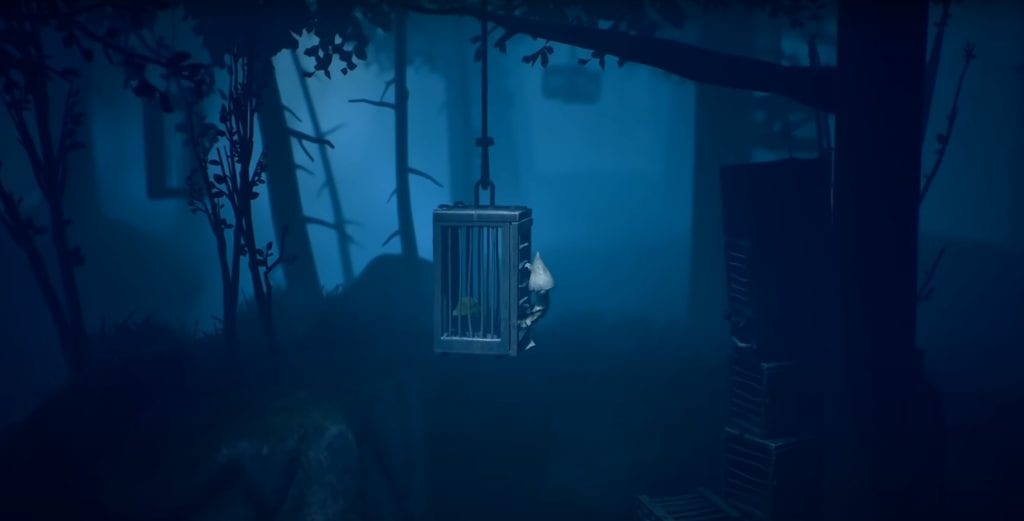 The Yellow Hat is up in a cage

To collect it, you’ll have to climb on the said cage, and then jump several times. When the cage drops, this Little Nightmares II collectible is yours.

Where To Find All Little Nightmares II Hats In Chapter 2

Moving to Chapter 2 named The School, you’ll have to find only 2 Hats: the Football Hat and the Metal Hat.

The first one is more of a mask, not a hat, and you’ll find it outside the School in the playground.

It is on the dumpster next to the entrance (pictured). 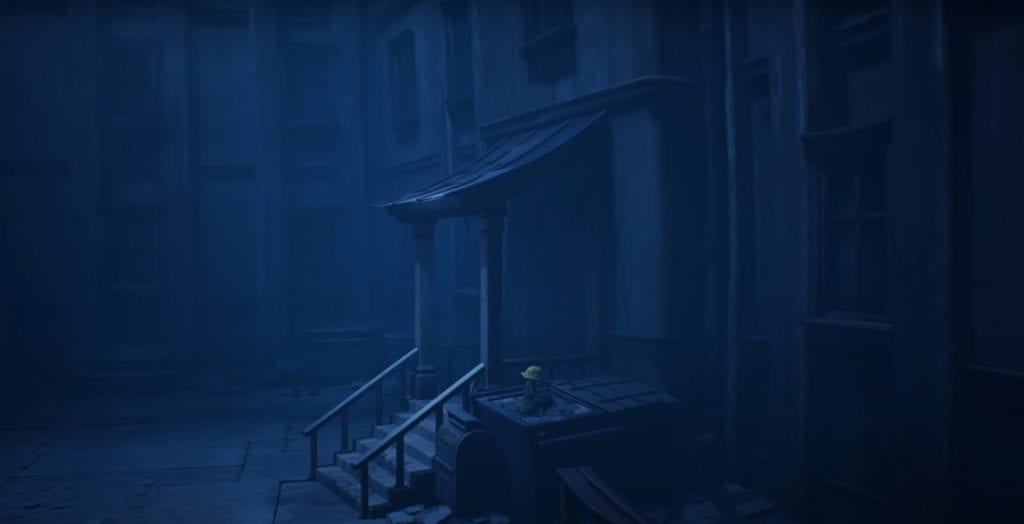 The Football Hat is on this dumpster

After you enter the School, you’ll eventually reach the Library.

This happens after the second encounter with the Teacher.

While inside the library look around to spot a ladder. Push it to the right (as you can see below) and then climb it to find this collectible. 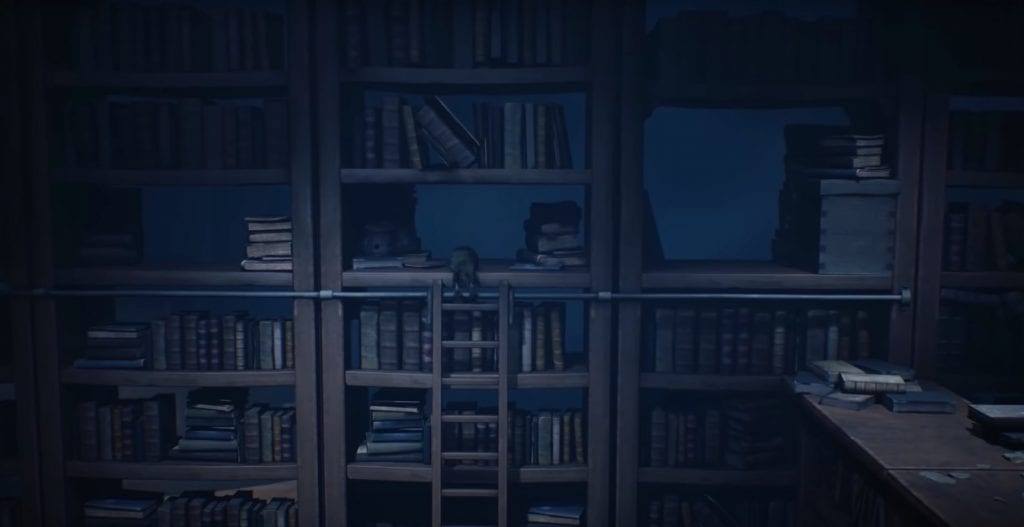 The Bucket Hat is in the Library

Where To Find All Chapter 3 Little Nightmares 2 Hats

After you complete Chapter 2, you’ll reach The Hospital, and again in this chapter, there are only 2 Hats that must be found: the Bear Hat and the Mummy Hat.

This Hat can be found in the nursery, next to the room where you’ll find an X-Ray machine.

In the screenshot below you can see that it’s on top of a bookshelf, and you can reach it simply by climbing the said bookshelf. 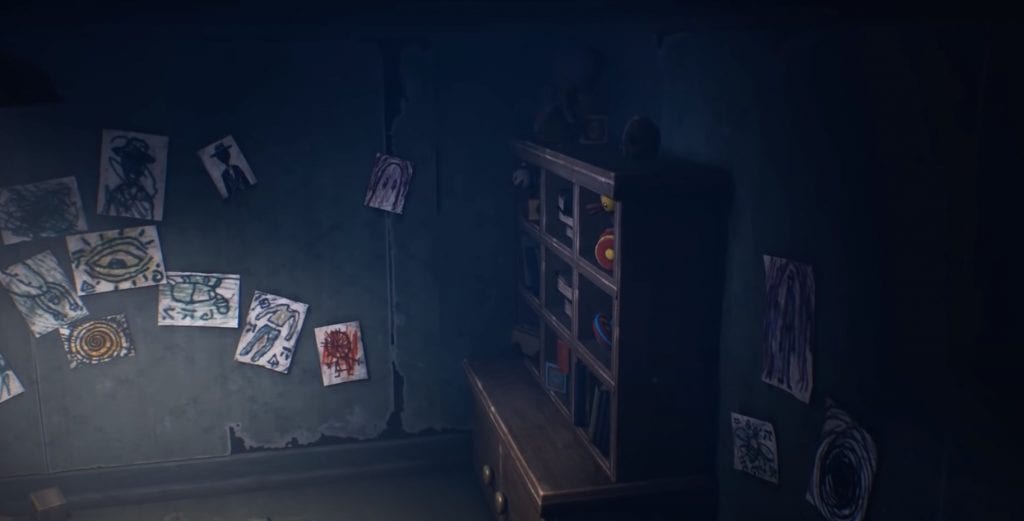 The Bear Hat is in the nursery

Next, we have the Mummy Hat (my favorite) which is found in the Morgue.

When you get to the said room, go around the central area and open the container pictured below to find it. 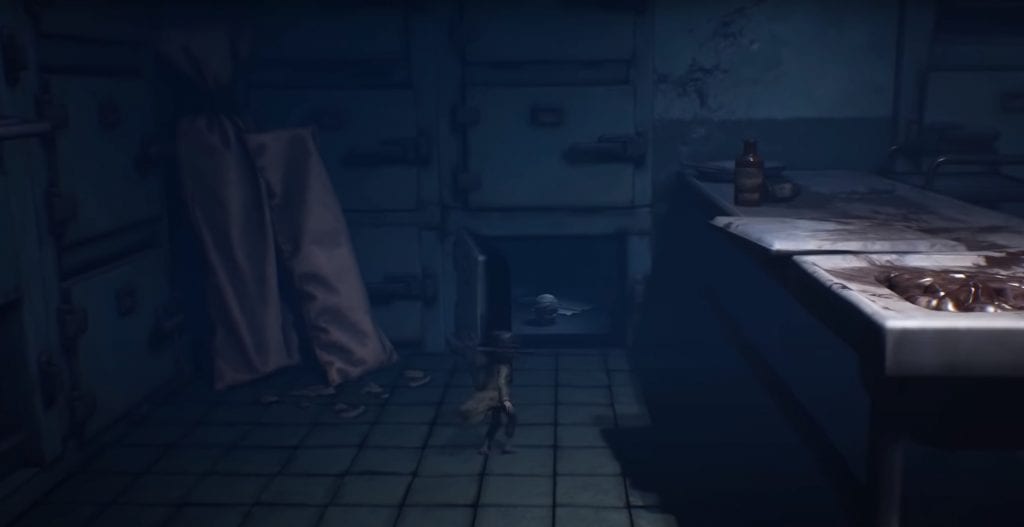 The Mummy Hat is in the morgue

Where To Find All Chapter 4 Little Nightmares II Hats

Finally, when you reach The Pale City or Chapter 4 you will have to find two last hats: Postman Hat and the Baker Boy Hat.

Both of them can be easily missed.

This Hat is probably the trickiest in the video game. It is found in the mailroom but inside a hidden tunnel.

You can see the said tunnel in the screenshot below. Simply walk inside and collect the hat. 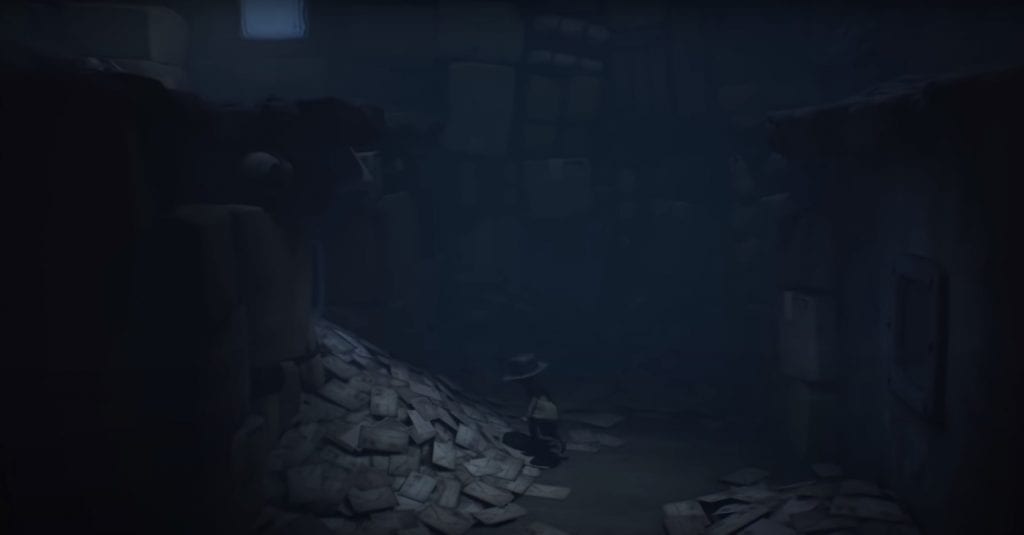 The Postman Hat is in the mailroom

Last but not least we have the Baker Boy Hat which is found in the Toy Store.

To get it, you’ll have to reach the top of a shelf. You can do this by pushing the shopping cart (right side of the room), all the way to the left.

Jump on it and look for the Hat on the upper left-side shelf. 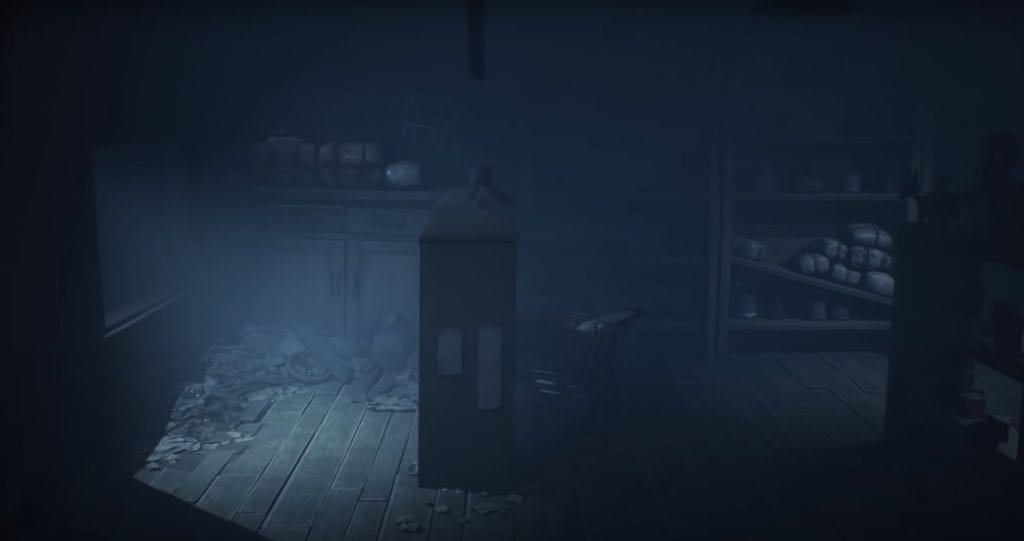 The Baker Hat is in the Toy Store

The final Hat available in the video game developed by Tarsier Studios is the Cowboy Hat which is obtained by completing the game and by finishing Chapter 5.

And that’s it. That’s how you get all Little Nightmares 2 Hats!

Valheim Withered Bones: Where To Find & How To Use

Valheim Muddy Scrap Piles: Where To Find & How To Mine

Valheim Swamp Key: How To Use & Open Swamp Crypt Gates

The Medium Thomas’s Hidden Room: How To Solve The Picture Developing Puzzle

The Medium Niwa Hotel: How To Enter The Resort

The Medium Thomas’s Office: How To Solve The Clock Puzzle

Valheim Save & Pause: How To Not Lose Your Progress