Disney Dreamlight Valley My Kingdom For A Scroll is the first friendship quest you’ll get from Mother Gothel after unlocking the character in The Curse main quest.

Your main objective in Mother Gothel’s quest is to obtain the Sun’s Scroll artifact; the catch is that you must steal it from Scrooge McDuck.

Don’t worry! The artifact doesn’t lead to riches, meaning Scrooge won’t miss it too much. But it does lead to the Sunstone, another artifact that will help you restore the Giant Willow in the Glade.

Now that Mother Gothel got your interest, you should check the following guide to have an easier time getting the Sun’s Scroll.

Obviously, the first thing you have to do is unlock the Mother Gothel character by completing The Curse quest mentioned before. Check our guide here if you need assistance.

You also need to unlock Wall-E, and if you don’t know how, check this guide.

Now find Mother Gothel with the help of your map and start Kingdom For A Scroll.

How To Get Softwood And Soil

You and Mother Gothel come up with a plan to find out the location of the Sun’s Scroll artifact.

You need to craft a Micberry Tree (a tree with a recording device hidden in it) for the plan to work, so you need to gather the following materials:

You can find Softwood lying on the ground everywhere except in Dazzle Beach. Look for small branches pilled up together, as shown in the next image.

You’ll find the most Softwood in the Plaza and Peaceful Meadow Biomes.

The Softwood can also be bought from Kristoff’s Stall, which you should have unlocked if you completed the Village Project: A Mountain Man’s Stall (covered in this guide).

As for the Soil, you can also find it everywhere except in Dazzle Beach, just like the Softwood.

However, you need to dig for the Soil (press RT on your Xbox controller to equip your Shovel), and you have a chance to get some with each hole you make.

Where To Find Box Of Electronics Components

The last material needed for the Disney Dreamlight Valley Micberry Tree is a Box of Electronics, which you can get from Wall-E’s house.

I can’t help you much in finding the shy little robot’s house because you chose where to put it.

However, the house surely stands out in the Valley because it’s a big truck with tracks, making it hard to miss. It also says Wall-E on it, just like in the screenshot below.

Enter the truck once you’ve located it, and look for the box immediately to the right, near the glass table.

How To Craft And Place The Micberry Tree

With all the needed materials in your backpack, go to a Crafting Station and make the Micberry Tree from the Furniture tab.

Then you have to place the tree next to Scrooge’s Store in the middle of the Plaza area.

Make your way to the store, press Y, go to Furniture, select the Mother Gothel icon, and then the Micberry Tree.

The ground under the tree must be highlighted green when you place it and don’t forget, it has to be near McDuck’s shop.

Now find Goofy and speak with him to put the plan of stealing the Scroll in motion.

Next, you have to talk to Mother Gothel and see if the clever plan worked.

It seems that the plan did work, and you now have to find the following:

Go for the Locked Chest first, which is buried in the ground on the east side of the Dazzle Beach area.

To be more precise, you have to go in front of the Mystical Cave you’ve opened when completing the With Great Power main quest (covered in this guide). You know the Cave; it’s the one with all the Magic Gates you had to go through to get the Orb of Power.

As another reference point, the Cave is in the mountain with a big patch of grass in front and a lot of trees.

Once you’ve found the Cave, look in front of it on the ground for the sparkling spot and start digging to get Scrooge McDuck’s Locked Chest.

Where To Find Scrooge McDuck’s Key

You have the Chest, but you need the key to open it, so go to the Glade of Trust area.

The key is in the water on the north side of the area, in front of the waterfall and some ruins. Look for the orange ripples in the water and aim your Fishing Rod there to fish the key out.

You can always check our guide here if you have problems with the fishing part in the video game developed by Gameloft.

Then all you have to do is bring Scrooge McDuck’s Key and Locked Chest to Mother Gothel to complete Disney Dreamlight Valley My Kingdom For A Scroll quest. As a reward, you’ll receive 180 XP and unlock Mother Gothel’s next quest, named Shine A Light (check our walkthrough here). 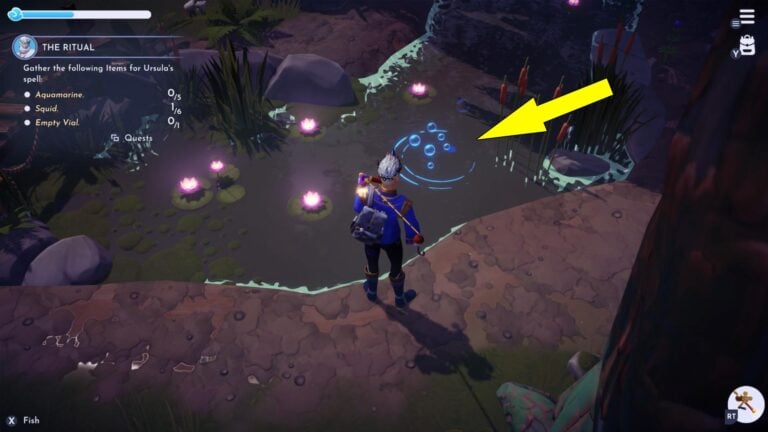 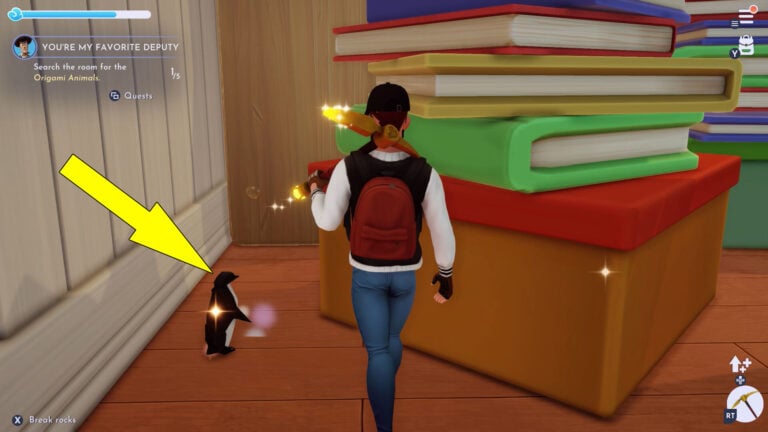 Now that you have gathered the two Yellow Daisies and the powerful adhesive Buzz Lightyear gave you in Disney Dreamlight Valley, You’re My Favorite Deputy Realm quest; the next objective is to find… 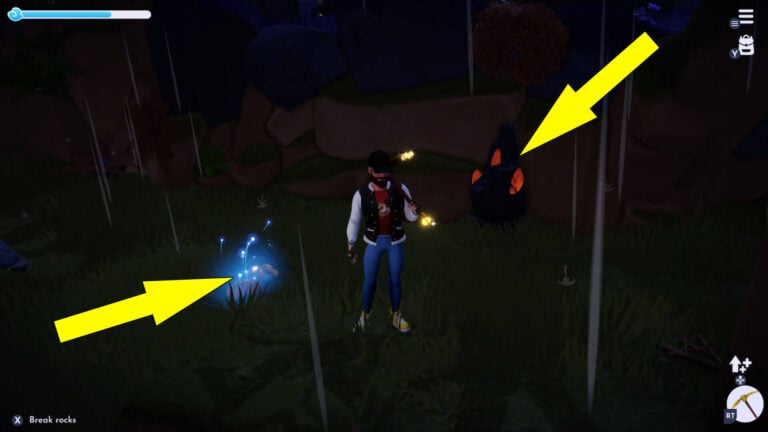 Gold Ingots are Refined Materials in Disney Dreamlight Valley that can be used in several Crafting Recipes and, more important, as quest items. The Gold Bars can’t be found in… 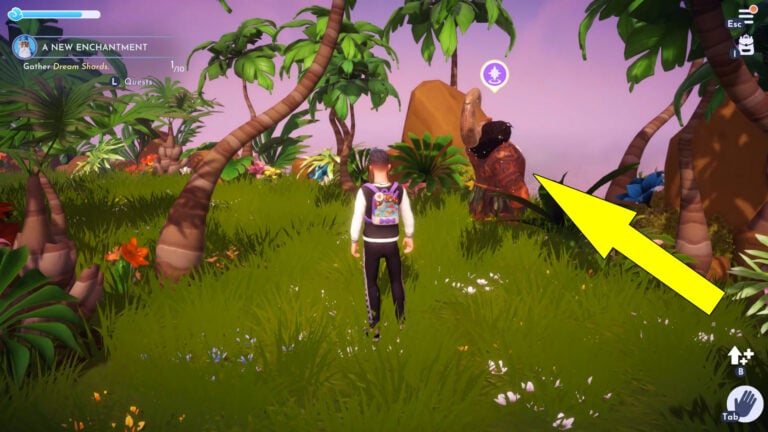 Prince Eric is the most difficult character to unlock in Disney Dreamlight Valley, but if you manage to access him, you’ll get three new quests and some nice rewards if… 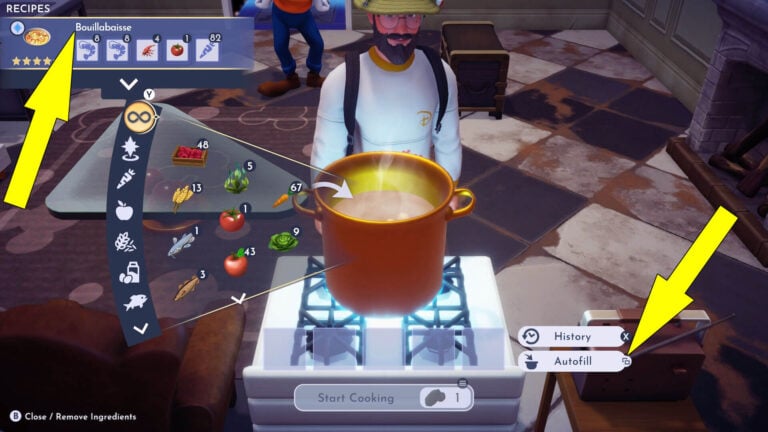 To complete Goofy’s friendship quest named Dinner With A Friend in Disney Dreamlight Valley, you have to cook two Bouillabaisses, which are 5-star dishes. The meals are for Goofy, who…