Along with the 6 Kena Bridge Of Spirits Fields Rot collectibles awarded automatically by completing all objectives in the fifth area; you’ll also need to find 19 Rots, hidden by the Ember Lab developers.

The  Kena Bridge Of Spirits Fields Rot, are by far the most challenging so far since you’ll have to do a lot of exploration if you wish to find all of them.

To complete this task faster, through the guide below, we’ll talk about all Kena Bridge Of Spirits Rot in the Fields and how to get them.

Again, along with the collectibles listed below, these funny guys are best approached after you finish Adira’s tasks in the Fields.

In this area which is the largest in the video game you’ll also need to find:

At the location marked on my map, you can find the first Kena Bridge Of Spirits Fields Rot.

To get it; however, you need to remove the corruption in front of the house.

You can do this by creating a Rot Cloud from the plant near the house, north of the Rot’s location.

To get the water drop, head behind the said house and use the flower on the roof, to get inside. Take the water drop to the plant outside, then use the Rot Cloud to remove the corruption on the other side of the road.

When you get inside the house with the Rot, use your bow to shoot the flower (also pictured) on the first floor. The Rot is under a crate on the right side.

The second Fields Rot is a bit easier because the puzzle you’ll need to complete is similar to one of the puzzles on Rusu Mountain.

Once you reach the location on my map below, you’ll see a garden and near the house a waterwheel.

Shoot the target on the said wheel, then from the plant nearby create a Rot Cloud and use it to water the plants in the garden.

The collectible is found inside a pumpkin that spawns in the field in the middle of the garden.

Also very accessible, is the Rot inside the Fields house marked on my map.

To get it, while facing the house; head right, and use a bomb on the stones blocking the entrance.

Now, on the right side, you’ll see a Cursed Chest. Open it and defeat all enemies before the time runs out.

There are 9 mobs that spawn and the Rot Hammer ability is pretty useful here.

After you remove the curse, inside the chest you’ll find another hidden Rot.

At the location marked on my map below, on the hill, you’ll find a small purple puddle in a dead end.

Use Kena’s Pulse to get the Rot.

From the previous collectible, find the entrance to the cave under the main path leading to the Forge.

Inside this cave look for a side room. The Rot is under a wooden pole on the left side.

For the next Kena Bridge Of Spirits Rot in the Fields area, you’ll need to finish a small challenge.

It takes place at the location marked on my map, where you’ll find a wooden platform.

While standing on it, activate Kena’s Pulse then quickly shoot the targets in the air.

One of the Kena Bridge Of Spirits Fields Rot is found under the Tower Entrance Fast-Travel Point.

To get this one, head down the spiral stairs in the back of the tower, then when you reach the underground cave, turn around to spot a stone with runes on it.

Scan it with Kena’s Pulse to reveal the Rot.

Moving west from the previous location, when you exit the cave under the Tower, you’ll reach a wooden platform with an elevator on it.

The Rot is under the wooden beam by the elevator.

The next Rot is a bit trickier and requires speed.

Basically, this one is found in a chest on top of the house marked on my map.

Another Rot that is a bit difficult is the one west from the Tower Entrance.

You can see its location on my map below and this is in fact a Rot puddle.

To get it, while standing in front of the Tower, head right and you’ll see a large pile of stones.

Start by bombing them, then shoot the crystal on the long column.

Now, shoo the flower on the upper stone, and you’ll land on the long column.

Turn around and you’ll see the stones in my second picture below. They are under the stairs.

Bomb them and in the area behind, you’ll find the puddle.

The next hidden Kena Bridge Of Spirits Fields Rot is in a chest inside the house marked on my map.

To get it you’ll have to shoot a flower which is also inside the house.

This can be done by bombing the stones up on the hill nearby, then by shooting the crystal on the biggest stone.

Jump on it, then you’ll be able to open the flower and get inside the house.

The next Rot comes with an archery challenge.

This starts on top of the tower marked on my map. To get there, simply bomb the stones near the tower; then shoot the two flowers to pull yourself up.

Use Kena’s Pulse while near the Rune on the ground, then shoot all the flying targets. Try to slow down the time as often as you can.

One of the most accessible hidden Rot collectibles is the one marked below.

Simply head to this location, then bomb the stone by the road to find it.

After you get the previous collectible, head southwest for another one that is really easy to get.

At the location I have marked for you, is a bridge.

Under this bridge, you’ll find a chest with a Rot.

Moving on, in front of the house marked below, you’ll see another field with vegetables.

Use the Tear in the bucket outside to grow the plant inside the house, then guide the Rot Cloud on the field.

The Rot this time is inside a pumpkin and it also unlocks a new Rot Hat.

Another accessible Rot is the one on the top floor of the house you can see on my map.

All you have to do to get it is to climb to the top floor using the painted ledges, then use Kena’s Pulse near the purple puddle on the floor.

For the next Fields Rot, head to the location on my map and throw a bomb to destroy the boulder in the screenshot.

Once you defeat the enemies that spawn, get the collectible.

For the last two Fields Rot in Kena Bridge Of Spirits, head to Rufus’ Barn area.

One of them is found on the top floor of the barn, and to get it, you’ll want to throw a bomb on the stones under the barn.

Climb them, then walk across the floor, following the painted ledges to find the purple puddle in my image.

Finally in the area with the rotating platform (left side while facing the barn) you’ll find the last Rot in the Fields.

Start by shooting the wheel with the crystals on it, then jump on the moving platform.

Wait for it to get to the other side of the barn (opposed to your stating location), then jump on the platform.

Here you’ll find a room with a chest inside. Open it to get the collectible.

These are all Kena Bridge of Spirits Fields Rot collectibles locations you’ll have to discover in the fifth area of the video game. 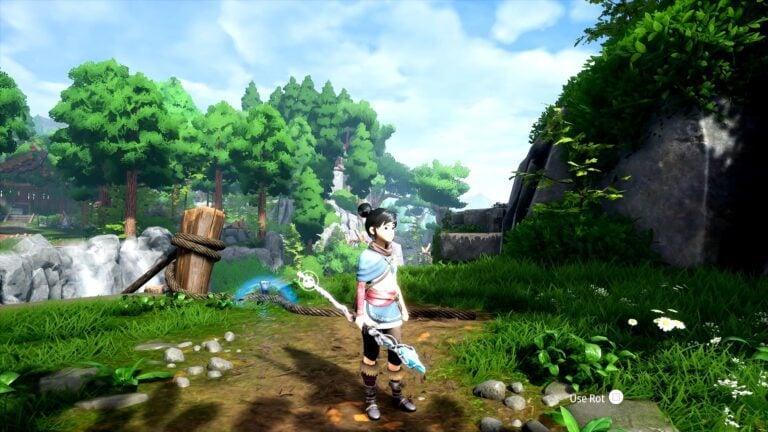 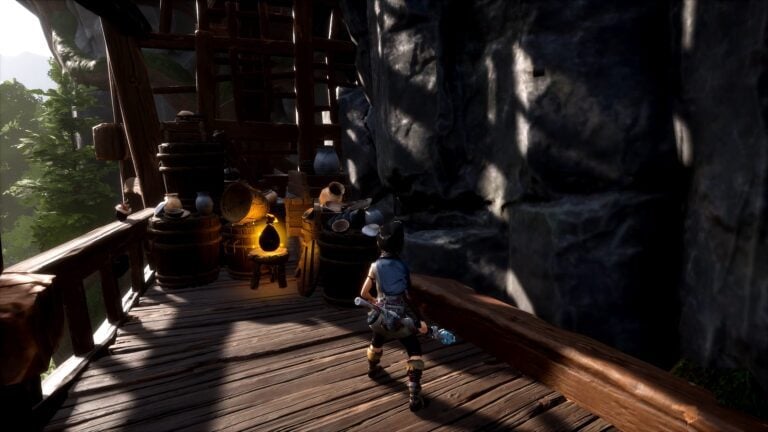 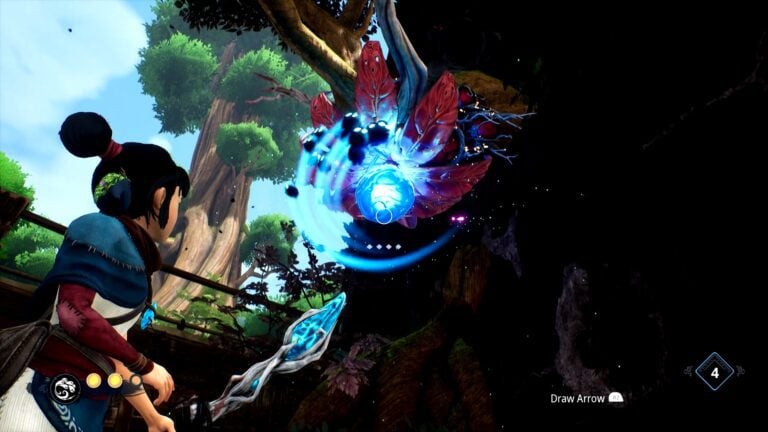 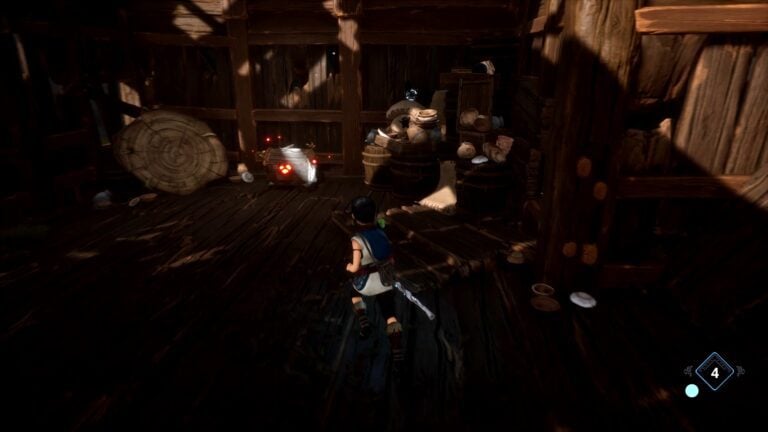 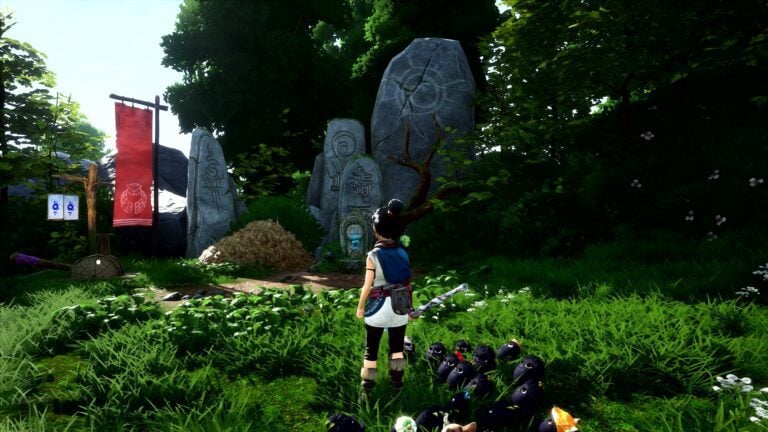 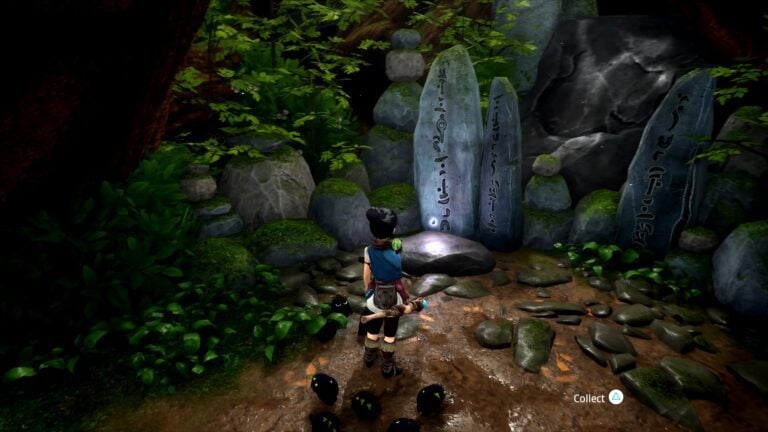 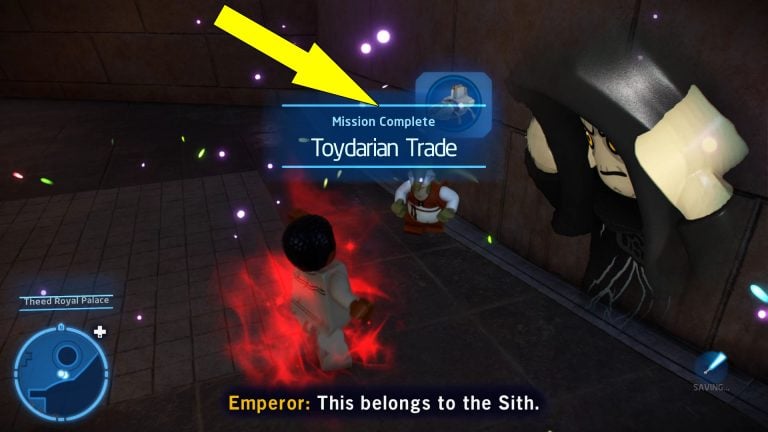