Ghost of Tsushima Bamboo Strikes are collectibles, mini-games, and hidden locations that must be discovered and completed while exploring the Island of Tsushima in the latest video game developed by Sucker Punch.

The Ghost of Tsushima Bamboo Strikes, are very important because they allow you to increase Jin’s Resolve.

Once found and completed, a Bamboo Strike mini-game improves Jin’s Resolve which means that you’ll be able to heal more and you’ll also be able to perform more Mythic Techniques.

Each time you find a Bamboo Strike in Ghost of Tsushima, you’ll have to complete a mini-game.

Usually, the locations of the Bamboo Strikes can be found through exploration; however, you will be able to find them faster if you use maps.

Throughout the following Ghost of Tsushima Bamboo Strikes locations guide, I will share with you the positions of all Bamboo Strikes in the video game.

The guide includes detailed maps that will point you in the right direction.

Furthermore, I will explain how to complete the associated mini-games faster.

Keep in mind that there are 16 Bamboo Strikes in the video game and you’ll need to find all of them in order to unlock the Body, Mind, and Spirit Trophy.

For the said PlayStation 4 trophy, along with these mini-games, you’ll also need to find all Inari Shrines, Haiku, and Hot Springs.

So, let’s start with some basic info and FAQs.

What Is A Bamboo Strike In Ghost Of Tsushima?

A Bamboo Strike is a hidden location you’ll need to find while exploring the world.

It counts as a collectible and it includes a mini-game you’ll need to complete.

How Many Bamboo Strikes Are In The Game?

What Do You Do At Bamboo Strikes In Ghost Of Tsushima?

Once you find one of these mini-games, place Jin in front of it and press R2 to start training.

Each mini-game includes three sequences during which you’ll need to cut a number of bamboo stalks.

The first sequence has 3, the second has 5 and the third has 7.

To cut through these bamboo stalks you’ll have to press the buttons on the screen in quick succession.

How To Find All Bamboo Strikes In The Game?

To find these Ghost of Tsushima collectibles you have two options.

The first one is through exploration and it requires your attention to the environment.

Alternatively, you can use the maps below and visit the marked locations without looking for them. The second method is obviously faster.

Where Is The Missing Bamboo Strike In Ghost Of Tsushima?

In Hiyoshi Springs. Although the icon will not appear on your map, you can complete this one by talking to an NPC as explained below.

What Do You Get For Completing All Bamboo Strikes?

You’ll be able to max out Jin’s Resolve. On top of this, Bamboo Strikes are required for the Body, Mind, and Spirit Trophy.

How To Check How Many Bamboo Strikes You Have Left?

If you wish to see how many mini-games you have completed (track your progress), open the game’s menu, and press L1/R1 to access the Collections tab.

Next, go to the Exploration sub-tab and look for the Bamboo Strikes window.

In the upper left corner, you can see the total amount of challenges in the game and the number of mini-games you have completed.

Is There A Ghost of Tsushima Bamboo Strikes Cheat?

Yes. Since these mini-games can be quite challenging, you may want to use a small Ghost of Tsushima cheat that will help you complete them way faster and without having to destroy your controller.

These mini-games have two components.

The first one is the sequence of buttons you need to press which must be the same as the one on the screen, and the second one is the time limit.

Removing one of these will make the Bamboo Strikes accessible for everyone, even if you aren’t a hardcore gamer.

So the time limit has to go.

To do this open the game’s menu, then go to Options, and then to Accessibility.

Now, turn the Simplified Controls On.

This trick will remove the time limit from the Bamboo Strikes mini-games and all you have to do is to press the corresponding buttons that appear on your screen at your own pace.

Normally, if you know the locations revealed below you’ll be able to finish these challenges in less than 15 minutes.

The first 7 Bamboo Strikes in Ghost of Tsushima are found in Izuhara Region.

Can be unlocked by completing the “Unfinished Business” Side Tale.

Located southeast of Quiet Basin Hot Spring and northwest of Logging Base.

Look for it southwest of Tadayori’s Rest.

In Hiyoshi Springs. Although the icon will not appear on your map, you can complete this one by talking to the NPC pictured below.

When you do that, he’ll unlock the Bamboo Strike nearby.

The next 6 Bamboo Strikes in Ghost of Tsushima are found in Toyotama Region.

Here are their exact locations.

Look for it east of Akashima Lighthouse.

Look for it north of Koshimizu Farmstead.

The last 3 Bamboo Strikes in Ghost of Tsushima are found in Kamiagata.

North of Kin Sanctuary and southeast of General’s Bartu Camp.

Next to a Pillar of Honor.

South of Derelict Mine. 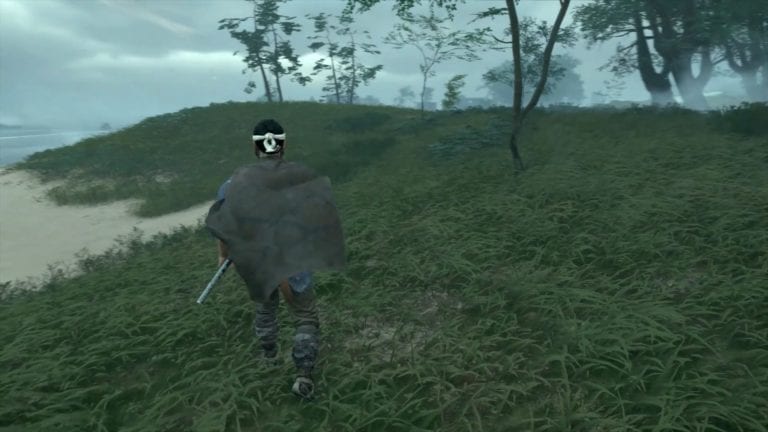