Shrine In Shadow or the Ghost Of Tsushima Wind Shrine In Shadow is one of the three Forgotten Shrines introduced by Sucker Punch Productions in the Iki Island DLC, released on August 20, 2021.

The Ghost Of Tsushima Shrine In Shadow allows you to unlock a unique armor skin for Jin Sakai, provided you know how to solve another small puzzle or riddle, similar to the one from the Shrine Of Ash.

So, below, we’ll go over the Ghost Of Tsushima Wind Shrine In Shadow puzzle, and I’ll tell you how to solve the associated riddle and how to unlock the Shadow Of The Colossus Armor Skin for Jin.

Where To Find The Shrine In Shadow On Iki Island?

The Shrine In Shadow is found on the southern side of Iki Island.

As you can see on my map below, it is located south of Buddha’s Footprints.

Once you approach the location marked above, you’ll find the shrine at the edge of a cliff.

Approach it and read the scroll on the small wooden bench in front of it.

“Stone knows no season,
nor the colossus that was
felled to save one soul.
Wanderer, come like through mist,
a ghost casting no shadow.”

Now, in order to solve the riddle, first, you’ll have to equip the Ghost Armor.

This set is unlocked when you finish the main quest named From the Darkness, in the second act of the video game.

Once you change your outfit from the menu; place Jin in front of the shrine and throw a Smoke Bomb.

To do so, hold R2 and Down to select the Smoke Bomb, then press R1.

This results in another beautiful cutscene you should watch.

When the cutscene ends, the puzzle is solved and you’ll unlock the Shadow of the Colossus Armor Set (pictured above) which includes:

After you unlock this set, move to the next Forgotten Shrine. If you need help with them just follow the Blood-Stained Shrine guide here or the guide for the Shrine Of Ash here. 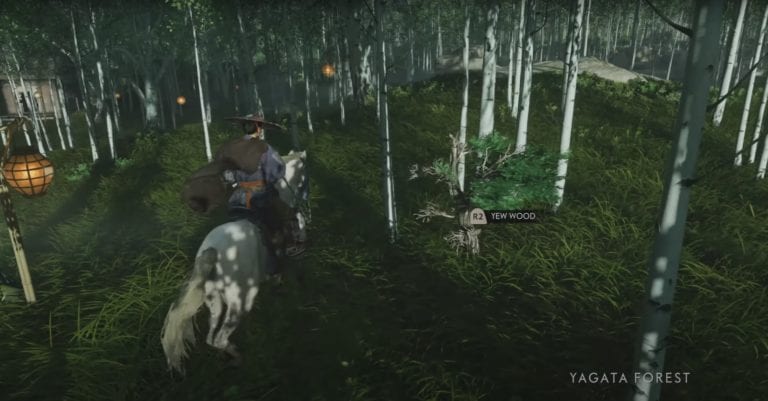 Shrine Of Ash or the Ghost Of Tsushima Wind Shrine Of Ash is one of the three Forgotten Shrines introduced by Sucker Punch Productions in the Iki Island DLC, released…