Love’s Embrace is an Immortals Fenyx Rising Aphrodite Armor Set gear piece (Plate) you can unlock while exploring the Valley of Eternal Spring area of the video game developed by Ubisoft.

The Immortals Fenyx Rising Love’s Embrace is found inside a Valley of Eternal Spring Epic Chest located south of Hall Of The Gods and northwest of Adonis’s Fall Vault of Tartaros.

The tendrils of Aphrodite’s armor wrap around the wearer as a bind of protection against enemies big and small.

Where To Find The Aphrodite Armor Set Breastplate (Love’s Embrace)

The Immortals Fenyx Rising Aphrodite Armor Set Chestplate or the Love’s Embrace armor is inside the Epic Chest you can see on my map below.

As you can see it is just south of Hall Of The Gods. 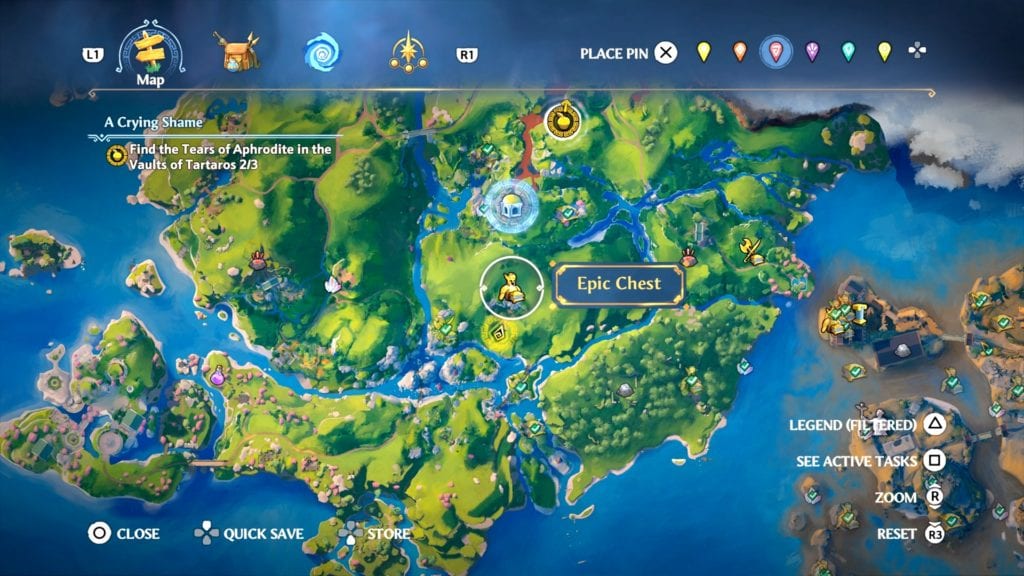 When you arrive at the location marked on my map above, you’ll notice that several Gorgons protect the cave you want to access, so it goes without saying that you’ll need to defeat them.

Check This Too!  Immortals Fenyx Rising Lion Armor Set: How To Unlock The Mane Of Hidden Pride Visual

Once you deal with them, you have to look for two switches.

In my image below you can see the one on the left which is a bit harder to find being masked by some bushes.

The other one also appears in my screenshot, on the right side.

This one is easier to find because it’s in plain sight.

Now, enter the cave and look up and to the left to spot a target.

Shoot it and the cube below the target will fall on the plate below with an anvil on it.

Now, head to the stairs on the right side of the cave and open a chest.

One thing worth mentioning here is that there is a small problem with the crate and it is possible to not fall on the said plate.

If this happens you have two options. You can return to the Hall of Gods, exit the game and then reload it.

Now head back to the cave, shoot the target, and hope for the best.

The easiest option though is to upgrade your Herakles’s Strength Power and obtain the Heavy Lifting which basically allows you to move even the heaviest crates.

Thus, you’ll be able to place the box on the plaque without too much effort.

Check This Too!  Immortals Fenyx Rising: How To Complete Adonis's Fall Vault Of Tartaros

That’s how you unlock the Immortals Fenyx Rising Love’s Embrace or the Aphrodite Armor Set Breastplate.