For the Immortals Fenyx Rising Trojan Gift quest you need to assemble the necklace Hephaistos will gift Harmonia in the future; and like most hidden quests in the video game developed by Ubisoft, you are challenged to solve another puzzle.

This puzzle is our current topic as it can become a bit frustrating if you don’t know what to do.

Before we start; from the Crazy Cupid Love quest guide, we learned that the Immortals Fenyx Rising hidden quests don’t appear on your map, so you’ll have to find them.

Since Immortals Fenyx Rising Trojan Gift is a hidden quest, we’ll start with its location, then I’ll tell you how to assemble the necklace by finding its pieces.

Because basically, this quest only requires you to find the necklace’s pieces and put them together. Easy enough? We’ll see about that.

Great so as you can see on my map below, the Trojan Gift takes place on the eastern side of the Valley of Eternal Spring area.

It is just north of The Messenger’s Path Tartaros Vault.

All you have to do is to travel to the location you see in my screenshot.

Check This Too!  Immortals Fenyx Rising Chimera Armor Set: How To Get Brood Of Typhon Breastplate

One thing to mention here is that this hidden quest is required if you want to complete the nearby Navigation Challenge; because at the end of the quest, you’ll unlock the plate which allows you to start the said challenge. 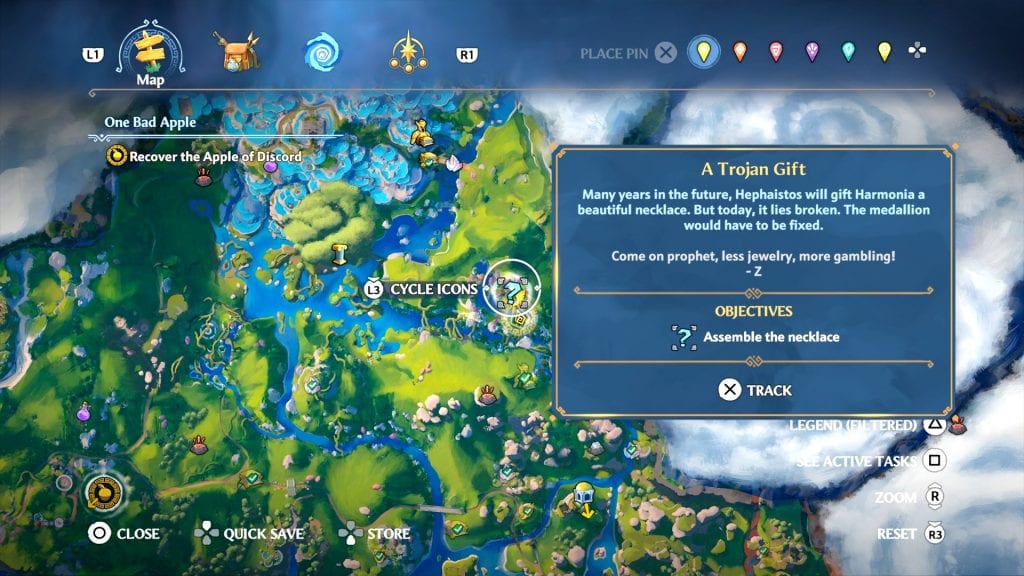 How To Assemble The Necklace

Good, so now travel to the quest area and start looking around.

If you pay close attention to the ground, you can see the shape of a necklace and your goal is to assemble it by finding three pieces.

They are purple and quite impossible to miss.

The first necklace piece is sitting by the necklace. You can see it in my picture below along with the slot you’ll have to place it in.

So, grab the fragment and drop it in the metal slot on the right.

The second necklace piece is also easy to find. In fact, you can see it in my picture above, behind the statue. It’s on a table and nearby you can spot a lever.

First, grab the second fragment and place it in the same slot; then return to the lever near the tower.

This lever will help you get the third piece which is the trickiest.

How To Get The Necklace Fragment Inside The Temple

Now, while standing near the lever, you’ll see three pillars close to the temple in front of you.

Check This Too!  Immortals Fenyx Rising Aphrodite Armor Set: How To Unlock The Love's Laurels Skin

One is on the left side of the red barrier, one is on the right side, and the third one is behind the forcefield. Or inside the temple, if you want.

The idea here is to pull the lever and when the clock starts ticking you have to light up all three pillars.

So pull the lever, and use Apollo’s Arrow to light up the pillar on the left side.

Guide your arrow through the brazier in front of the statue, then hit the pillar.

Do the same with the one on the right side.

And now, to hit the third pillar, you’ll use another arrow, light it up from the brazier and squeeze it between the columns of the temple.

There is enough space to do that as you can see below.

After you hit the third pillar, the barrier disappears, and you’ll get the third necklace fragment.

Take it to the metal slot, then get ready to fight a Cyclops. After you defeat the monster this hidden quest ends.