Immortals Fenyx Rising One-Eyed Giant is the third Vault of Tartaros you’ll have to complete in the video game developed by Ubisoft.

One-Eyed Giant Immortals Fenyx Rising Vault Of Tartaros is also your objective in the Blurry Vision main quest, which means that it’s mandatory to finish it if you want to progress through the story.

Again, there are several objectives we need to complete here; however, don’t worry because I’ll guide you through this vault from start to finish so you can get everything in a single run.

So the One-Eyed Giant Typhon’s vault includes 3 important items or objectives if you want.

Before we begin our walkthrough, as usual, let’s see some details about the Clashing Rocks One-Eyed Giant Challenge. 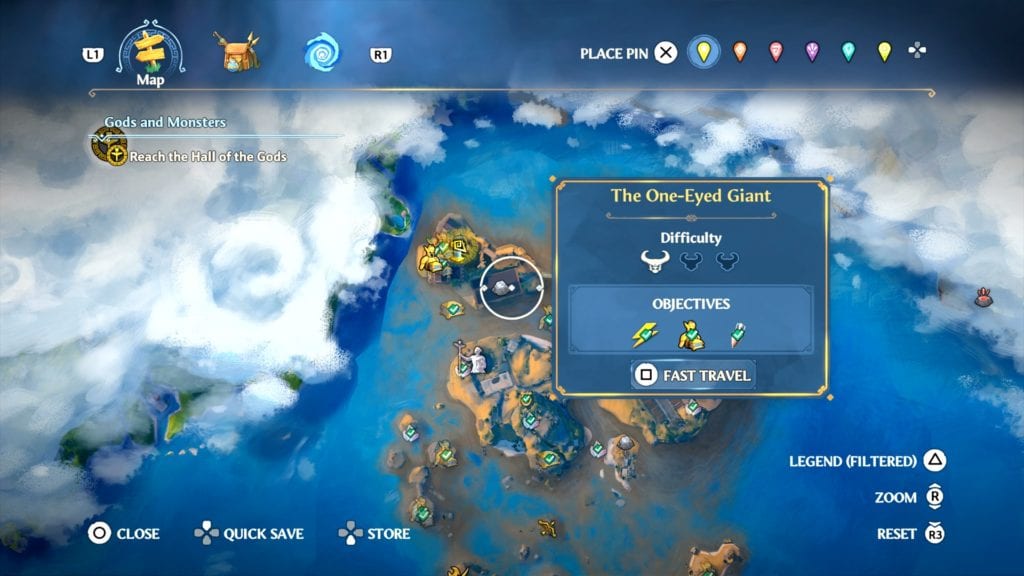 Good, so as you can see on my map above this Vault of Tartaros is located in the western Clashing Rocks area. Here is what you should know about it.

To complete this Tartaros Vault your goal, as usual, is to reach the final chest; obviously while getting every item inside, because these items count as objectives.

Check This Too!  Immortals Fenyx Rising: How To Complete Arena Of Heroism Vault Of Tartaros

Simply follow the instructions below and you won’t miss any objectives.

When you start the challenge head forward and activate the first switch on the left side.

Now climb the columns in front of you and activate the next switch.

Next, climb the four columns that spawn, and in the next section, defeat the two Gorgons.

Without insisting on combat, once you are done with them, jump on the next two columns, and on the left side, you’ll see a small altar with a pomegranate.

Now look around and you’ll see a switch.

First, use your Herakles’s Strength to pull the crate on the left column and place it on the feather plate.

Now you’ll be able to get the chest that contains the Helm of The New Olympian (New Olympian Armor Set).

Check This Too!  Immortals Fenyx Rising: How To Open The Clashing Rocks Mountain Cave Epic Chest

Where To Find The One-Eyed Giant Vault Of Tartaros Chest

This is the trickiest objective and it may require several tries.

The idea here is to jump on the moving column, then turn left and when the column is lined up with the chest, you’ll have to jump on the next column.

Just so you know it’s harder than it seems.

Keep moving towards the chest, open it, then jump back to the moving column.

Good so now continue following the main path and in the next section, pull the second wooden crate that spawned earlier (it’s on top of a column) and place it on the feather plate on top of the stairs.

Wait for the next column to approach, hop on it and it will take you to the next section. Here you’ll have to solve a small puzzle.

The first thing we are going to do here is to activate the two switches that will make two spheres spawn.

Let’s deal with the one inside the cage first.

The idea is to make the sphere or the ball fall into a hole.

You can do this by standing close to the hole and pull the ball towards you using Herakles’s Strength. Here is where you need to be.

Check This Too!  Immortals Fenyx Rising Trojan Gift: How To Assemble The Necklace

Now, you’ll need to deal with the other ball.

Simply push it into its slot around the corner as you can see.

Awesome! So now, it’s time to do more jumping on the next platforms.

When you reach the upper floor you’ll find a door and behind it Mikros The Adorable is ready to test you.

He’s an accessible opponent you can defeat quite fast and after you do that more platforms will appear.

Where To Find The Jar Of Aiolos & Zeus’s Lightning Chest

Hop on the said platforms and right in front of you (also pictured below) are the final two objectives: the Jar Of Aiolos and Zeus’s Lightning Chest.

Grab them and you’re done with this vault.

That’s how you complete all the Immortals Fenyx Rising One-Eyed Giant Vault Of Tartaros objectives.