In the Immortals Fenyx Rising One Bad Apple quest your objective is to recover the Apple of Discord for Aphrodite, and although this objective may look quite accessible at first, things are a bit different.

The main reason is that the Immortals Fenyx Rising Apple of Discord is a quest item and we already know that most quests in the video game developed by Ubisoft come with puzzles.

Some of them are easier, and some of them are very challenging as we have discovered while playing the game’s Hidden Quests or while opening various Epic Chests.

The One Bad Apple in Immortals Fenyx Rising is no different, meaning that once again you’ll encounter a puzzle, and only by solving it you can fulfill Aphordite’s wish, thus progressing through the story.

So, in the Immortals Fenyx Rising guide below we’ll talk about how to recover the Apple of Discord and together we will also figure out the puzzle solution.

Where To Find The Immortals Fenyx Apple Of Discord

Great then, so let’s start with the One Bad Apple Immortals Fenyx Rising quest location because to solve the puzzle first we need to know where to find it.

As you can see on my map below, this is taking place in the Valley of Eternal Spring area.

Specifically in the Palace of Aphrodite, or if you want south of Mastering Phosphor’s Clone Vault of Tartaros. 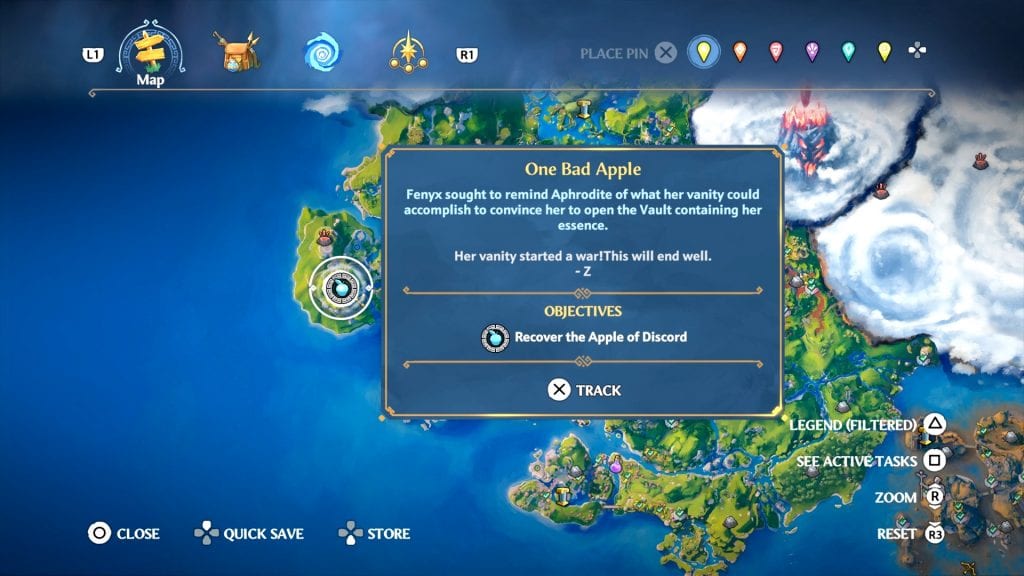 Make sure you reach this location, then follow the ramps up to the top of the palace in question.

Once you reach the top you’ll see two quite large statues and a very big and impressive apple. Which happens to be locked.

You’ll also encounter some soldiers here, but we won’t discuss them because they’re quite accessible.

So, clear the area and let the fun begin.

To solve this puzzle, first, you’ll need to identify the smaller statue behind the large apple.

In front of the said statue, you’ll see three plates. One of them has a smaller apple on it, while the rest are empty.

The idea here is simple. Find the two missing apples.

Let’s get the first one which is pretty close. While facing the small statue, follow the stairs behind it to see a really large statue depicting Aphrodite.

The first apple is located at the bottom of the said statue in a clam.

Pick it up, and place it in the area below on one of the plates.

Now, while facing the three plates turn right and in the distance, you’ll see a smaller tower. This is the area where the Crazy Cupid Love hidden quest takes place.

Check This Too!  Immortals Fenyx Rising: How To Solve The Cabbages Puzzle In A Crying Shame Quest

As you can see in my picture below, there’s a ton of apples here.

Glide above the gap, pick one and then throw it on the other side.

Now, simply carry it to the third plate. As you’ll notice the big apple unlocks. But you’re not done yet because that big apple is not the Apple Of Discord.

Where Is The Apple Of Discord In Immortals Fenyx Rising

After you unlock the big apple, you’ll have to do some heavy work, meaning that your next goal is to push it down the ramp nearby.

Or the one in front of the statue.

Keep pushing it down the ramp until you see another large statue.

Here you’ll have to stop and look around a bit.

At the end of the ramp (the one going down), you’ll see a barrier. Look above the gate to see two targets.

Shoot both of them using Apollo’s Arrow and you’ll remove the red forcefield.

Now the path forward is clear, so get the big apple and push it down to the next section.

Once it gets to the next gate you’ll trigger the cutscene and you’ll finally get the Apple Of Discord which is smaller. You can’t make an apple pie using this one but it’ll help you complete the quest the moment you return to Aphrodite.

Check This Too!  Immortals Fenyx Rising Soldier Armor Set: How To Unlock The Valor Of The Soldier Helm