Brood Of Typhon Breastplate is an Immortals Fenyx Rising Chimera Armor Set gear piece (Plate) you can unlock while exploring the Valley of Eternal Spring area of the video game developed by Ubisoft.

The Immortals Fenyx Rising Brood Of Typhon Breastplate is found inside a Valley of Eternal Spring Epic Chest located northwest of Hall Of The Gods.

Born to be horrifying twosome Typhon and Echidna, the Chimera was a beast to behold. In this armor, you’ll be quite the beast yourself.

The Immortals Fenyx Rising Chimera Armor Set Plate or the Brood Of Typhon Breastplate is inside the Epic Chest you can see on my map below.

As you can notice it is several steps away south of Odysseus’s Prison Vault of Tartaros. Or if you want just across the river. 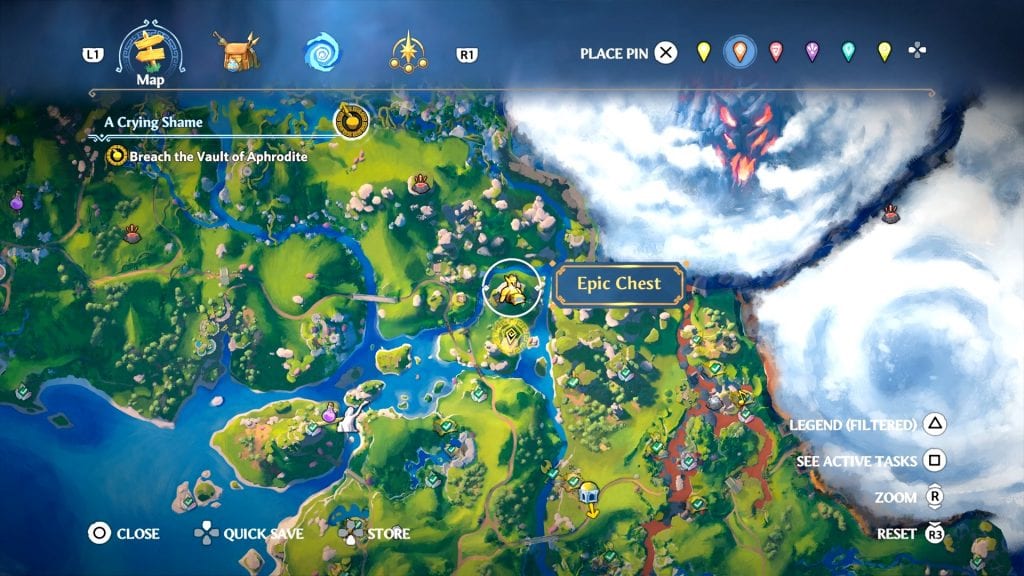 Once you arrive at the location on the map above, you’ll find some ruins and nearby a mountain cave.

Check This Too!  Immortals Fenyx Rising: How To Open The Clashing Rocks Mountain Cave Epic Chest

The mountain cave is blocked by a forcefield and obviously, our prize is behind the barrier.

Additionally, on top of the ruins, you’ll see 6 pillars that have some locks on them.

The idea behind this puzzle is rather easy to figure out but harder to execute.

Because you have to set on fire only four out of six Valley Of Eternal pillars; yet the game doesn’t tell you which ones.

And that’s what I am going to teach you how to accomplish.

So, after you find the said ruins, climb on top of the mountain. Or the area above the cave with the chest.

Here you’ll find several enemies that must be dispatched.

Once you do that, look around for a plate and step on it.

This will unlock the pillars you’ll have to set on fire.

Now, using the brazier in front of the plate, fire an Apollo’s Arrow and aim for the second pillar from left to right.

Then do the same with the third, fourth, and sixth which is partially masked by a tree.

In the image above you can see the pillars, you’ll have to activate.

Always use Apollo’s Arrow and make sure you set these 4 on fire.

When you do that, you can hear a distinctive sound and the barrier disappears.

Check This Too!  Immortals Fenyx Rising: How To Open The Clashing Rocks Shipwreck Epic Chest

Drop to the cave below and claim your prize.

That’s how you unlock the Immortals Fenyx Rising Brood Of Typhon Breastplate or the Chimera Armor Set Plate.