Causing Helen of Troy to fall in love with Paris is the objective of a very short and funny Immortals Fenyx Rising hidden quest named Crazy Cupid Love; a quest that can be played in the Valley of Eternal Spring area of the video game developed by Ubisoft.

This quest involves a small puzzle I am going to cover below, and although the rewards for completing it are rather useless, it’s still nice to help Helen of Troy and Paris.

Even if we are talking about two statues.

So, as you know Immortals Fenyx Rising hidden quests can’t be found by normal means, because unlike quests from other video games, they won’t appear on your map.

Or simply put, if you want to finish all hidden quests in Immortals Fenyx Rising, you’ll need to visit specific locations.

When you do that you’ll trigger a small dialogue and only then you’ll be able to play the said quest.

Easy right? It is if you know where to go. Otherwise, they can be a pain to track.

That’s why we will start the Immortals Fenyx Rising Crazy Cupid Love walkthrough with the location of the quest; followed by a short guide on the puzzle you’ll need to finish.

Ok, so as you can see on my map below, this quest is on the western side of Valley of Eternal Spring.

Check This Too!  Immortals Fenyx Rising: How To Complete Odysseus's Struggle Vault Of Tartaros

Specifically near the Palace Of Aphrodite point of interest, or if you want; next to the Fresco Puzzle you’ll have to solve here.

When you get close you’ll see a round tower and a large statue depicting Paris. 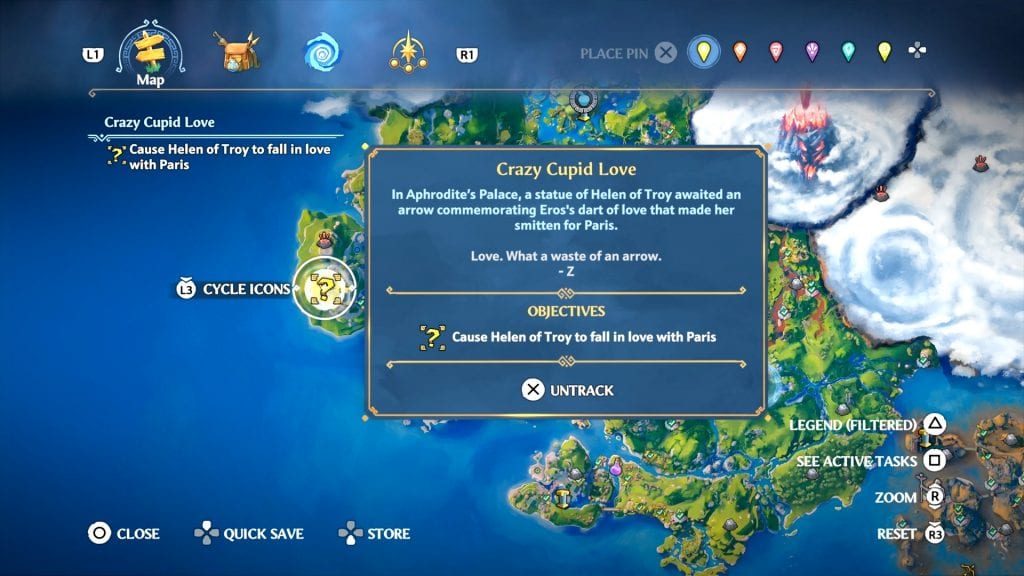 How To Help Helen Fall In Love With Paris

Now that we know where to find this hidden quest; it’s time to solve the puzzle and start a romance between Paris and Helen of Troy.

The first thing you’ll have to do is to go around the tower (on top of it is Helen) and find a plate with a feather on it.

That plate must be activated, so grab an iron box from the ground (it’s in front of the tower) and place it on the said plaque.

By activating the plate, you’ll cause an airstream to start, from the vent you see in my screenshot above.

Jump on it and flap your wings to glide up.

The airstream takes you to the top of the tower where you can see Helen.

Behind Helen, as you can see in my image is a target.

Shoot it and the quest ends. Now, Helen fell in love with Paris.

Keep in mind that before heading down, there will be 12 Blue Mushrooms behind Helen. Those are your rewards for this hidden quest.

Check This Too!  Immortals Fenyx Rising: How To Complete Arena Of Fortitude Vault Of Tartaros

That’s how you complete Immortals Fenyx Rising Crazy Cupid Love hidden quest and cause Helen of Troy to fall in love with Paris.