If you’re looking to beat Tunic, then you have to make sure that you loot all Dark Tomb Golden Chests because you need all the help you can get to fight your enemies in the video game published by Finji.

The Dark Tomb Golden Chests will give you the following rewards:

I suggest entering the Dark Tomb right after you are done with the Under The Well area, which also has plenty of Golden Chests you can loot with the help of this guide.

Before you venture into the Tomb, note that having the Lantern we covered in-depth in this guide is mandatory, or else you won’t be able to see a thing.

Even so, you’ll only have a small light radius around you and can easily miss some of the Tunic Dark Tomb Golden Chests.

Therefore be sure to check the guide below to find all seven Golden Chests without any problems.

Where To Find All Dark Tomb Golden Chests In Tunic

You can enter the Dark Tomb directly from Under The Well because the two areas are linked together.

Or you can find the Tomb in the northwest corner of the Overworld map. Look for where it says DARK TOMB on the map.

I have marked the locations of all Golden Chests on the following Dark Tomb map.

So let’s get to it and get the Chests one by one.

Golden Chest #1: On Top Of A Platform

Get inside the Dark Tomb and proceed forward with extra attention because the Tomb has lots of enemies and traps.

When you get close to the first marked location on the map above, you’ll see the first Tunic Dark Tomb Golden Chest on top of a platform.

To reach it, you must first interact with two skeleton heads located on the northeast and northwest corners of the room.

You have to stand near each skeleton and press A on Xbox.

Then the platform moves, revealing a ladder leading to the next room.

But before leaving this room, don’t forget to open the Chest, which you can now reach by going up the stairs between the two skeleton heads.

You’ll get an Ability Card that, if equipped, you have increased attack when you are low on health.

Golden Chest #2: In The Corner

You can now go down the ladder near Chest #1 and make your way to the room containing the next three Tunic Dark Tomb Golden Chests, which are marked on the map above, of course.

As soon as you enter the said room, go left, and after a couple of meters, you’ll find the second Golden Chest in the corner.

From the Chest, you’ll get a Fire Bomb that explodes and burns enemies if used.

Golden Chest #3: Near A Trap

Upon opening the previous Chest, you must go back and take the stairs down to get to the lower floor of the room.

Deal with the enemies here, and be careful not to step on the traps.

Then go to the room’s northwest corner, where you can loot the next Dark Tomb Gold Chest right near a trap.

And you’ll receive a Potion Shard. You need a total of three for an extra Healing Potion slot.

The fourth Tunic Dark Tomb Golden Chest is found in the same room as the previous two Chests, but in the northeast corner and on the lower floor, as you can see on the map above.

The fourth Chest is under Chest #2 as another point of reference.

Loot the Chest to get some Game Currency.

Continue from Chest #4 and go to the next room through the small entrance to the left.

Make your way to the fifth marked location on the map above to find the correspondent Dark Tomb Golden Chest between two big fox statues.

Destroy the turrets surrounding the Chest first, then open it to receive Game Currency again.

Golden Chest #6: Through The Secret Passage Behind The Fox Statue

Now you have to go behind the Fox Statue to the right of Chest #5.

You should find a secret passage to the right, as shown in the next image.

Go through the path until you hit the wall. Then, stop walking to see the A button (on Xbox) appearing on the screen.

Push the button to open the sixth Dark Tomb Golden Chest and obtain a Golden Coin that you can use at a well to receive an extra Ability Card Slot.

On to the last room of the Dark Tomb and the seventh marked location on the map, where you’ll find the final Dark Tomb Golden Chest in the middle, surrounded by turrets.

Loot the Chest to get an Effigy which you can use to obtain more Game Currency.

You’ve done it, tomb raider! All the goodies inside the seven Tunic Dark Tomb Golden Chests are yours. 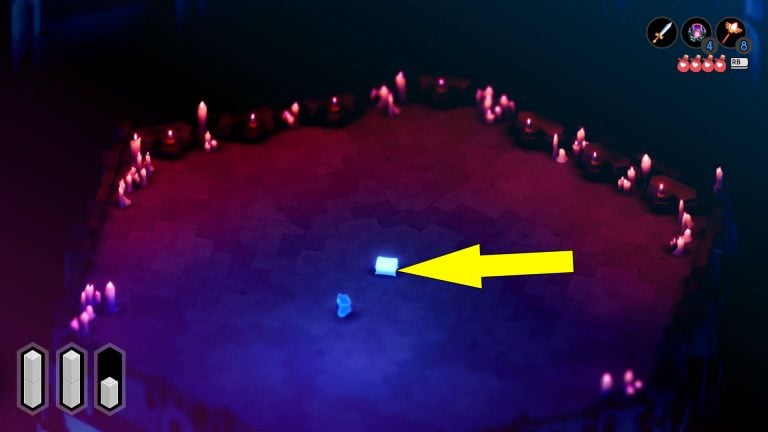 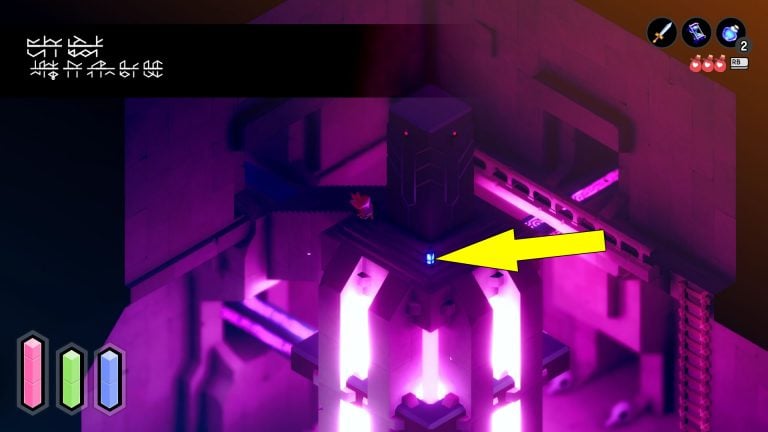 The Lantern in Tunic will make it easier for you to navigate the darker areas of the video game published by Finji. The Lantern doesn’t cost energy or anything to… 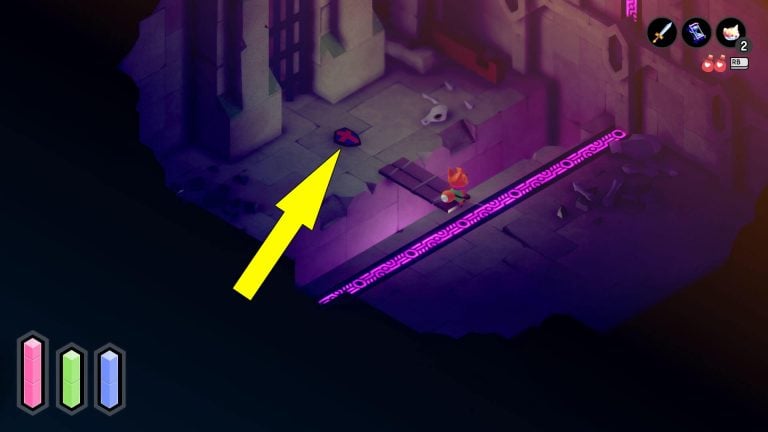 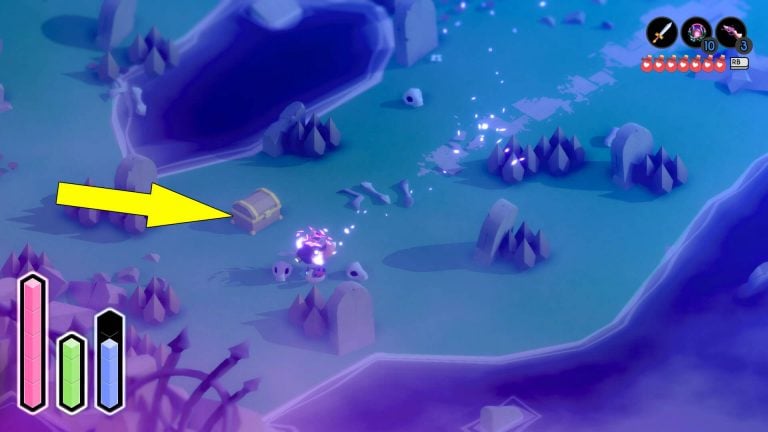 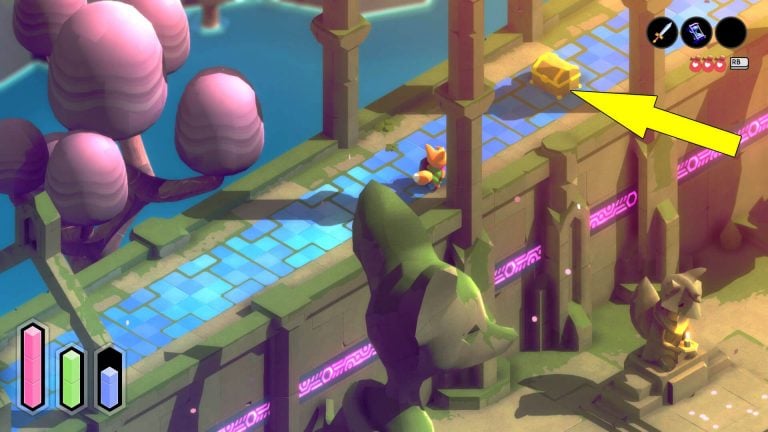 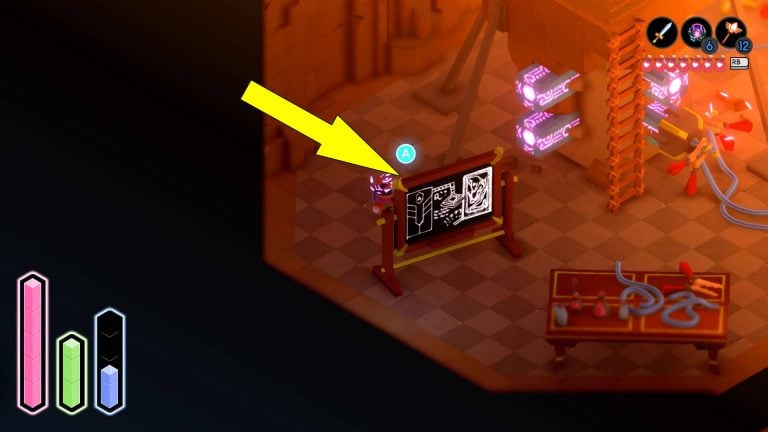