Cyberpunk 2077 Alec Johnson Cyberpsycho Sighting is a Gig you can complete in Watson, Little China area.

This gig is named Ticket to the Major Leagues and your goal is to find and neutralize Alec Johnson.

Where To Find Alec Johnson In Cyberpunk 2077

Look for Alec Johnson west of Clarendon Street fast travel point as you can see in the screenshot.

It’s on the western side of Watson in the Little China neighborhood. 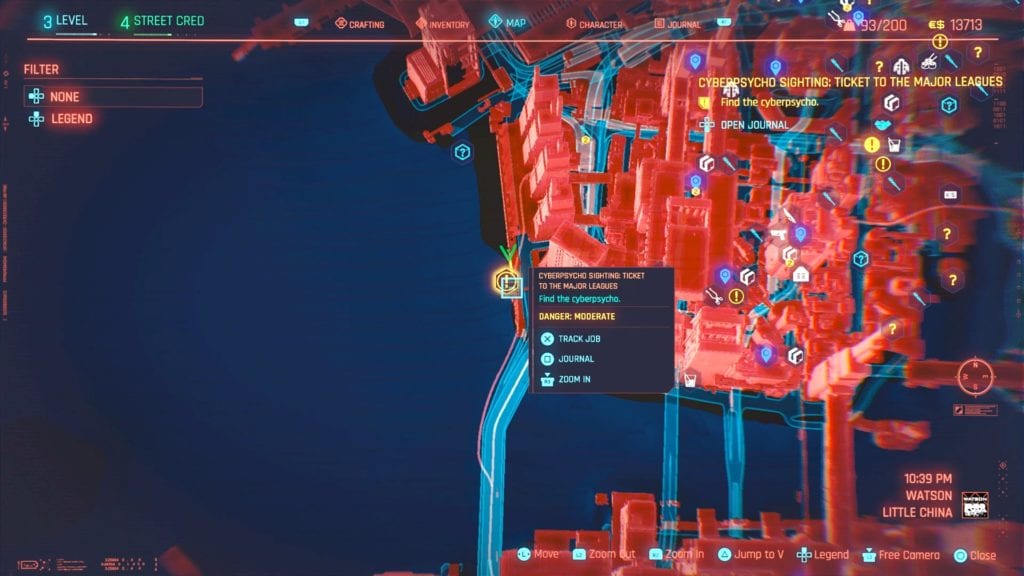 To get close to your target, go around the building, and stay close to the waterfront.

Since there are no guards in this area, you can reach Alec really fast. Just sneak around but don’t forget to investigate the clues.

Alec (see image below) is facing a wall and here you have two options. You can try a sneak attack from behind to dispatch him, or you can alert him.

If he spots you, he’ll run to a fighting arena, and you’ll have to face him.

How To Neutralize The Cyberpunk 2077 Alec Johnson Cyberpsycho

Unlike Lt. Mower, Alec is slow but there are several things you should know.

Check This Too!  Cyberpunk 2077 Tarot Graffiti Locations: All Westbrook Cards

While you can use firearms, keep in mind that Regina asks you to neutralize not kill Alec Johnson.

The suggested approach here is a fistfight, so remove your weapons or select your fists from the selection wheel.

This is a simple match where parrying and dodging are very important.

If you completed the training mission, defeating Alec is a walk in the park.

Simply block and strike only when you have an opening.

An interesting aspect is that Alec Johnson is currently bugged, meaning that he may not hit you.

In my case, he kept running around without landing a single punch.

Don’t leave the area without looting every single spot because there is a lot of equipment and materials to be found here.

After you neutralize Alec; check his corpse for two shards and don’t forget to send a text to Regina and let her know the Cyberpsycho was neutralized.

Once defeated, Alec Johnson drops a lot of loot (gear, weapons, etc…) but these items are usually random.

That’s everything you need to know about Alec Johnson and the Cyberpunk 2077 Cyberpsycho Sighting: Ticket to the Major Leagues Gig, so good luck fighting him; and when you’re done look for Lely Hein.