In Cyberpunk 2077 Mikhail Akulov’s Datashard is your objective for a  CP77 Gig you can complete in Watson, Kabuki area.

This gig is named Fixer, Merc, Soldier, Spy, and your goal is to find and retrieve Akulov’s Datashard from Hotel Raito.

Once you do that, if you travel to the location on my map below, Regina calls you regarding this particular job.

Look for this gig on the eastern side of Watson Kabuki.

On my map below you can see that it’s northwest of Pinewood St South fast travel point. 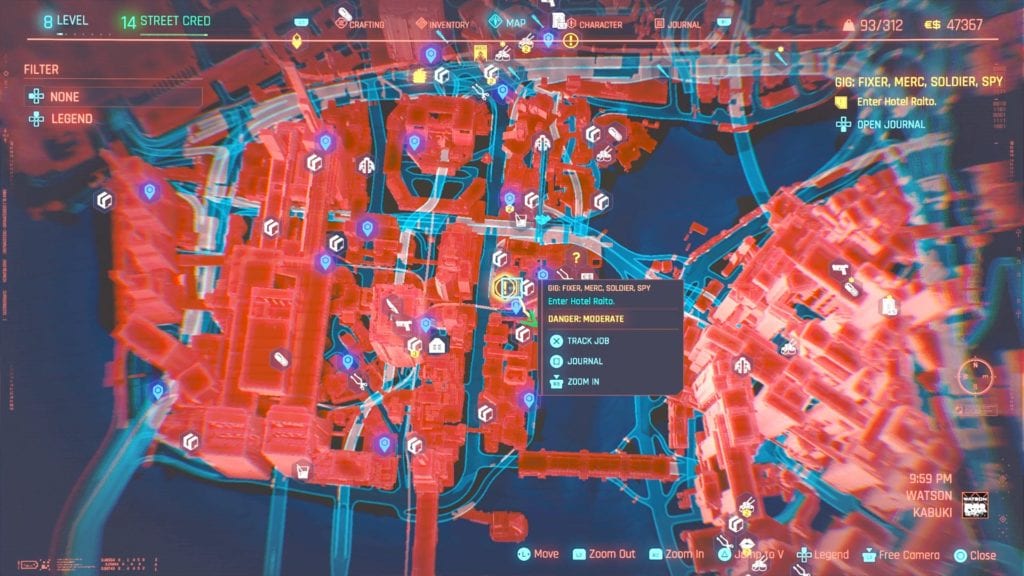 When you get close to this location, Regina will send you a small briefing on what you have to do; but the idea is simple.

Get inside Hotel Raito, find Mikhail Akulov’s Datashard, and steal it. Preferably undetected.

Although it may seem impossible to retrieve Mikhail Akulov’s Datashard undetected, this mission is very accessible as you are about to see.

So, here is what you need to do to get the shard which by the way is located in a penthouse on the last floor of Hotel Raito.

The first step here is to get inside Hotel Raito and you can do this through the front door.

The hotel’s receptionist is easy to deal with.

Simply go left around him then grab and take him down from behind as you can see in my image. The two guards in the lobby won’t move from the couch.

Now, loot the receptionist to get the Elevator Access Token, and if you want you can check the backroom behind his office for another token and some loot.

Once you get the Elevator Access Token, head to the elevator in the lobby and use it on the left elevator.

The elevator on the right is blocked and you’ll use it to get down.

Inside the elevator select 21 Apartments and go up. When you get to floor 21; exit the elevator and take a right turn.

In front of you, there’s a glass door, and it is imperative to go through it because it grants you access to Akulov’s balcony. You can see it below

Go through the said door, then turn left and climb on the balcony. On your left side are the penthouse, two guards, and multiple security cameras.

Make sure that you take your time and inspect the area slowly, looking for all cameras. Disable all of them especially the one on the balcony.

Next, cross the balcony and takedown the guard that is patrolling, and drop the body in the crate near the door.

At this point, if you breached all cameras, you can go through the door nearby and pick the shard pictured below. It’s on a glass table.

Once you do that, deal with the final guard and fully explore the area and the apartment above. There is a lot of loot here.

Finally, take the elevator down and exit Raito Hotel.

Deliver The Shard To Regina’s Client

The final step in this mission starts when you reach the street and Regina calls you.

She’ll tell you that she wants you to deliver Mikhail Akulov’s Datashard to her client.

Follow the path on your minimap and you’ll reach a parking lot.

When you get close to the car, pick Huscle – Hand Over Shard.

Keep in mind that Regina clearly states to not ask any questions because her client doesn’t like that.

After the client investigates the shard the gig is done.