In Cyberpunk 2077 Hal Cantos is a targeted objective for a CP77 Gig you can complete in Watson, Northside area.

This specific gig is named Occupational Hazard, and your goal is to find Hal Cantos inside Mox Warehouse on Longshore North.

After you do that, if you travel to the location on my map below, Regina Jones calls you about this gig.

Look for this gig east of  Martin St. fast travel point, and north of Kabuki Market in Watson, Northside.

On my map below you can see the location of Mox Warehouse. Kabuki Market should be a known place for you if you finished the Woman Of La Mancha Gig. 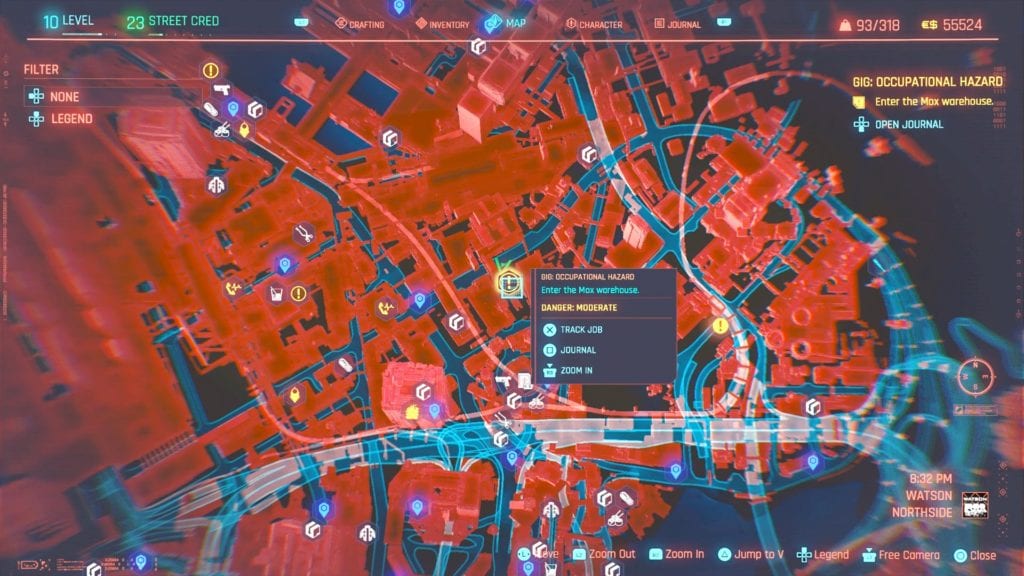 When you get close to this location Regina sends you a small briefing on what you have to do.

This gig is again very accessible because you’ll have to deal only with an enemy.

The good thing is that, well, is only one.

The bad thing is that the enemy is a cyberpsycho.

But first, let’s get you inside the Mox warehouse.

Where To Find Hal Cantos In Cyberpunk 2077

The moment you get to the warehouse you’ll be able to spot a small office near the main entrance (on the right side).

Check This Too!  Cyberpunk 2077 Tarot Graffiti Locations: All Westbrook Cards

But the problem is that the door requires 5 Technical Ability points. If you have them, then you can enter, although it’s not the best idea.

Instead, go around the building (right side while facing the entrance, and you’ll see a yellow ladder above a blue car. It looks just like the one in my image below.

Use the said ladder to get on the roof and in front of you, there is a window.

At this point, you’ll have to deal with her and here you have multiple options. You can drop inside and play around, or you can play safe and snipe her down while on the roof.

Either way, Anna Nox must die (you can’t reason with her), and she is very similar to Lieutenant Mower, meaning that she’s fast. My suggestion is to play safe.

Good, so once you are done with Anna, drop inside the warehouse and look around, looting everything.

She’s hurt but unlike Anna, she is friendly.

There are several dialogue options at your disposal and you can find more about Anna and your target Hal Cantos.

Talk to her, then head downstairs and look for the container in my screenshot. Knock on its door and you’ll hear Cal.

Tell him it’s safe to get outside, and you’re done with this mission.

That’s everything you need to know about Hal Cantos and the Cyberpunk 2077 Occupational Hazard Gig.