In Cyberpunk 2077 Hwangbo Dong-Gun is a targeted objective for a  CP77 Gig you can complete in Watson, Northside area.

This gig’s name is Flight Of The Cheetah, and your goal is to find Hwangbo and escort him to a meeting place.

Cyberpunk 2077 Flight Of The Cheetah, requires you to reach Street Cred Rank 1, first.

Once you do that, if you travel to the location on my map below, Regina Jones calls you regarding this particular fellow.

Look for this gig northwest of  Megabuilding H10 fast travel point, on the southern side of Watson, Northside.

On my map below you can see the location of Sunset Motel. 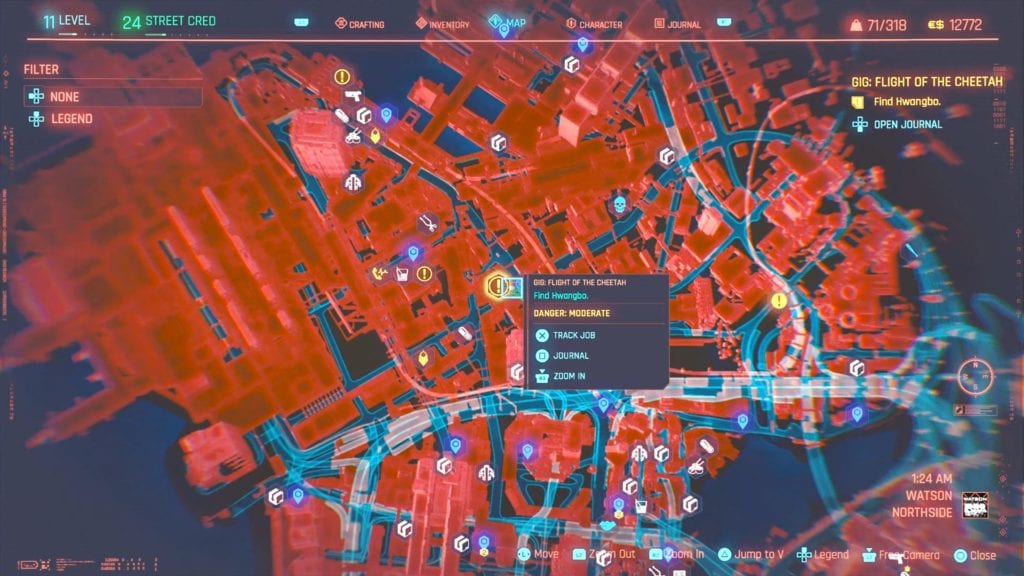 When you get close to this location Regina sends you a small briefing on what you have to do.

This gig is as easy as one-two-three with little to no combat and dialogue choices that lead to the same outcome.

Where To Find Hwangbo In Cyberpunk 2077

The first thing you’ll have to do is to reach Sunset Motel. Here you may or you may not encounter several enemies.

Depending on when you visit this location.

If you spot any resistance dispatch all of them however you see fit.

This choice depends on how you developed your character.

Once the area is clear you’ll need to find Hwangbo. He is in room 1237 but you can also spot him at the balcony overseeing the parking lot behind the motel.

While facing Hwangbo, on the left side you’ll see some stairs that allow you to get close to him.

Now talk to him and pick whatever dialogue line you want, as all of them have the same result.

Next, you’ll be asked to escort Hwangbo to the meeting with the Nomads.

When you get this objective though; a bunch of enemies will spawn and you can deal with them however you like.

If you want and if you are lucky, you can keep your head down and get to the street following the same stairs outside the motel; however, Hwangbo may reveal himself, and then this plan will lead to a gunfight.

Alternatively, you can dispatch all enemies before leaving the area. It’s up to you, but just so you know, Hwangbo won’t help you and he can’t take damage.

Now, before heading to the meeting place, cross the street and opposed to the parking lot you’ll see a green car which belongs to Hwangbo. This is the car you’ll want to use to get to the meeting spot, assuming you want to complete the optional objective.

Check This Too!  Cyberpunk 2077 Tarot Graffiti Locations: All Watson Cards

The ride to the meeting place is rather boring, but once you get there if you want to encourage Hwangbo; then tell him that Regina knows what she’s doing. This answer doesn’t affect anything, but it encourages the friendly NPC who looks a bit scared.

When he gets out of the car, the gig ends.

That’s everything you need to know about Hwangbo Dong-Gun and the Cyberpunk 2077 Flight Of The Cheetah Gig.