The Assassin’s Creed Valhalla Oxeneforda Gear Chest allows you to unlock the Magister’s Trousers while exploring the Oxenefordscire region; and just like the Magister’s Robes (in Leah Villa Garrison) and the Magister’s Vambraces (inside Buckingham Church), this piece of gear is a bit tricky.

The AC Vallhalla Oxeneforda Gear Wealth collectible is hard to reach if you don’t pay close attention to the environment.

The good thing about it, though; is that once you find out how to enter the Oxeneforda Tower you’ll also be able to unlock the Vengeance of Thor Ability; however, that one requires a key.

So, first’ let’s get the gear at this location.

As you can see on my in-game map below this collectible is found in the northern part of Oxeneforda.

Quite easy to see, yet harder to get. 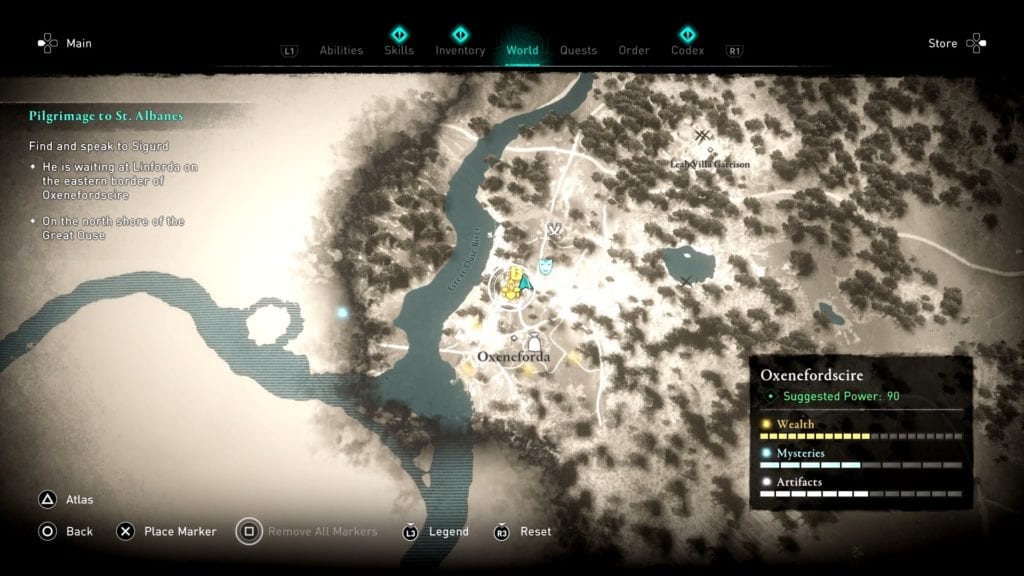 How To Get The Oxeneforda Gear In AC Valhalla

Once you get to the location of this collectible look around and you should see a large tower. It features several levels, but the main door is barred from the other side.

So how do we get inside?

While moving around the tower in the village, look up, and you can see some colored windows on the first floor.

Check This Too!  Assassin’s Creed Valhalla Wrath Of Druids How To: Get The Brega Hoard Map Treasure

You can see one of them in my screenshot.

Aim high and shoot one of these windows, but be advised that only those on the first floor allow you to get inside.

Once you break one of them, it’s time to do some climbing.

When you reach the first floor, look up and you will see a weak section made of planks. Simply shoot those too and climb to the second floor.

Good, so now we have a new puzzle to solve because the gear chest is behind a shelf you can move.

Except that you can’t because it’s blocked.

Again look up and you’ll see a chandelier made of wood. Quite primitive if you ask me, but it will get you inside.

Shoot the locker on the chandelier (pictured below) and when it falls to the ground it will destroy whatever is blocking the shelf in front of you.

Now, all you have to do is to push the said shelf and claim the Gear Chest and the Magister’s Trousers.

And that’s it, friends. That’s how you get the Assassin’s Creed Valhalla Gear inside Oxeneforda Tower in Oxenefordscire; however, now you should focus on getting the Hidden Ones’ Mask inside Londinium Bureau.