The Assassin’s Creed Valhalla Oxenefordscire Hoard Map is also an important Artifact you’ll need to find in the video game developed by Ubisoft; because as we already know the Hoard Map in each region will lead us to a hidden treasure and a unique item we can collect.

The AC Valhalla Oxenefordscire Hoard Map, is no different than the rest, although it’s a bit buggy; however, don’t worry because you can still get the treasure, provided you find the map first.

Which is not a map but a note.

So let’s go claim this one together, but be advised that there is a bit of riding involved.

As you can see on my map below the Hoard Treasure Map in Oxenefordscire is north of Eatun Barn, but there is a catch with this one, so pay close attention to my map. 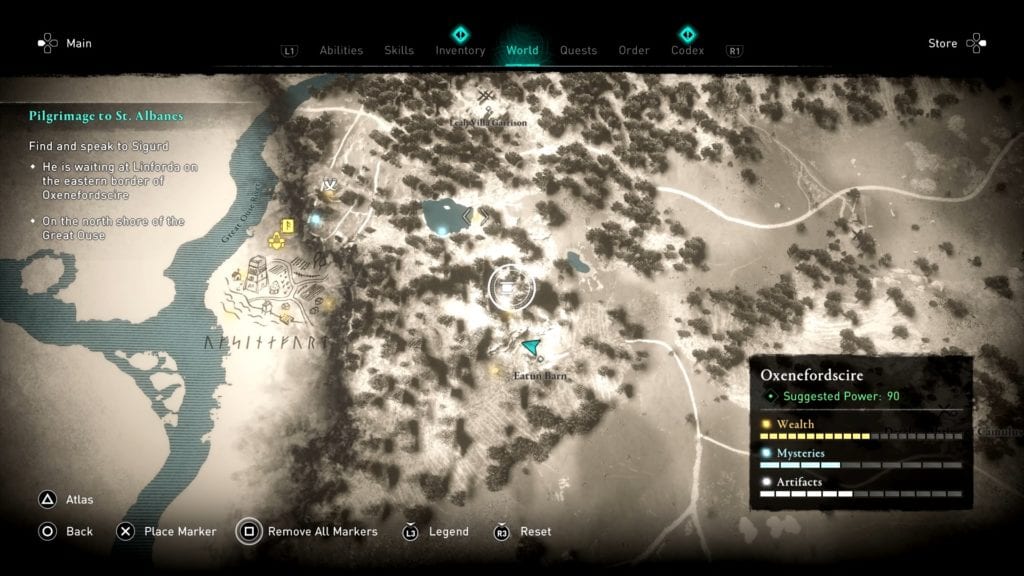 This specific artifact is located inside a tunnel, but the entrance to the tunnel is south-east of the actual collectible.

In other words, on my map, you can see the artifact you need to locate and the location of the entrance which is marked by the green arrow.

Or simply put, in this screenshot, Eivor stands in front of the tunnel.

Now, when you get to this specific spot, you’ll see a small village and the tunnel’s entrance will be blocked.

Check This Too!  AC Valhalla Rygjafylke Wealth: How To Get Underwater Carbon Ingot

You can obviously clear it by shooting an explosive arrow, but if you did not unlock that ability you can also opt to use a red jug and throw it into the stones that block the entrance.

The jug in question is found several steps away from the tunnel as you can see in the next screenshot.

Once you get inside the tunnel, things are pretty accessible.

There is only one path you can take and it will lead you to an underground cave.

Feel free to explore it, but your objective is on the left side as you enter.

To reach the collectible you’ll have to move another boulder.

Then, you’ll see the Hoard Map standing on a small Roman altar.

Get it, then open your inventory to see the map, which is a note that gives us enough hints on the location of the treasure.

On the said note you can read the following lines:

“In the southern heaths of Oxenefordscire, there is a vast pasture. The livestock act as my protector. They hum and haw away the evil demons. Find the peculiar ruin.

You can find me where the waters used to run.

The lost shimmer of its wavelets still shines within me.”

Where To Find The Oxenefordscire Hoard Treasure

Good so from the notes above we can learn a few things:

Open your map again and head south of your current location which is Eatun Barn. You can see the location of the treasure on my map below.

Check This Too!  Assassin’s Creed Valhalla How To: Beat Hertha The Very High At Flyting

Here you will see a vast pasture, with sheep and a well.

While the sheep are not important, the well is, and you can find it close to a really impressive tree.

Now, your goal is to destroy the wooden cover on the well and drop inside.

The treasure will be highlighted inside the small tunnel, you’ll find under the well. Or where “the waters used to run”.

Now as mentioned, this artifact is bugged for some players, meaning that even after you find the treasure, the hoard map remains in your inventory.

If this happens you can return to the well and recollect it after you fast travel to another location. You won’t get a new Snakebite Scheme (Figurehead) ship cosmetic, but you’ll get 180 XP, which is pretty nice. And you can do this for as much as you want.

And that’s it, friends. You just found the Assassin’s Creed Valhalla Oxenefordscire Hoard Map Treasure location, but the one in Sciropescire is waiting for you.